'Golden Contract' Among 16 Shows Canceled By BBBoC Due to Coronavirus

The British Boxing Board of Control (BBBoC) has announced that all events in March that fall under its jurisdiction have now been cancelled.

Shows around the world have been pulled off the schedule at an alarming rate due to the ongoing coronavirus disease (COVID-19) pandemic, with the BBBoC officially following suit.

“With regard to the above [Covid-19] and the statement made by the Prime Minister Boris Johnson, all public tournaments under the jurisdiction of the British Boxing Board of Control are unfortunately cancelled," Robert W. Smith, general secretary of BBBoC announced in a statement on Tuesday. "Further consideration of the matter will take place at the beginning of April.” 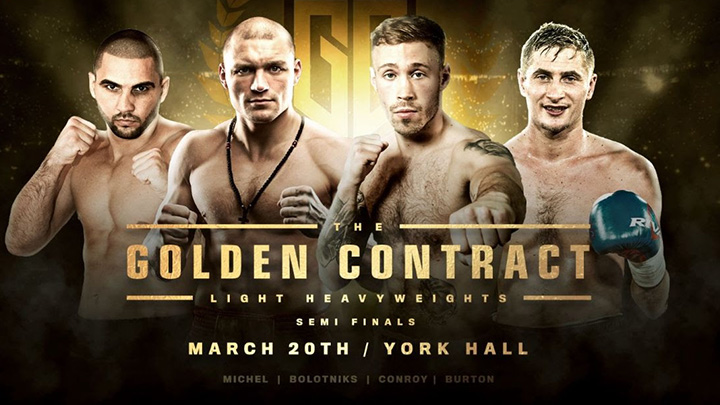 Confirmations have been coming through, with this week’s MTK Golden Contract light heavyweight semi-finals, which also featured the Commonwealth and vacant British super lightweight title clash between Philip Bowes and Akeem Ennis-Brown, now postponed. Full refunds will be available from point of sale.

“The #GoldenContract light-heavyweight semi-finals will take place at a later date and we look forward to bringing big-time boxing back to as many venues and as many TV screens as quickly as we can. In the meantime, we hope you all stay safe,” MTK Global wrote in a statement published not long after inboxes received word from the British Boxing Board.

Hennessy Sports also issued a statement to confirm that their March 28 and April 25 shows in Coventry and Crystal Palace have been postponed. This delays the British light heavyweight title fight between Shakan Pitters and Chad Sugden on the 28th and the European featherweight title fight between Samir Ziani and Alex Dilmaghani next month. Full ticket refunds are available for both events.

“We are closely liasing with the Board, our broadcaster, managers, boxers and sponsors to reschedule both events when it is safe to do so,” said promoter Mick Hennessy.

Boxing Scene reached out to leading UK promoters Eddie Hearn (who promotes Avanesyan v Kelly) and Frank Warren, whose big European heavyweight title fight between Daniel Dubois and Joe Joyce takes place on April 11, but both were unavailable for comment.

F[I]uc[/I]k! They cancel all my afternoon weekends fight. This is going to get very boring. :damnit1: