Golden Boy Prez: May 12 is NOT Good For Lomachenko-Linares

Eric Gomez, the president of Golden Boy Promotions, has confirmed to BoxingScene.com that Top Rank reached out to them regarding a possible fight between WBA lightweight titlist Jorge Linares and current WBO super featherweight champion Vasyl Lomachenko, who will be moving up to 135-pounds.

Top Rank's CEO Bob Arum, who handles Lomachenko, told BoxingScene that he wants the date of May 12, on ESPN.

"May 12th is an extraordinarily important date for ESPN programming. It's right in the middle of the basketball playoffs," Arum said. 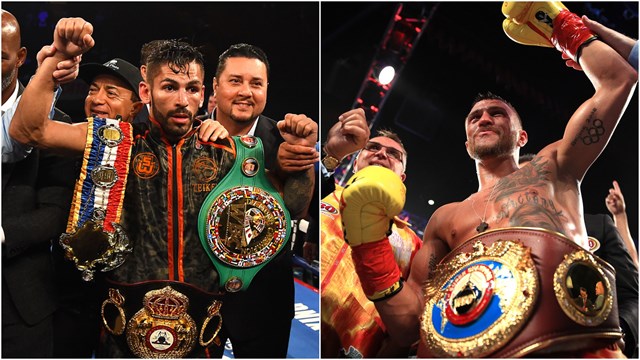 But Gomez indicates that he's more than happy to make that deal - but not on the requested date of May 12.

"I was contacted for the first time by Carl Moretti (V.P. of Boxing Operations for Top Rank), I was hoping it was Bob (Arum) so he could invite us to his house for those sandwiches with no crust. Which is fine, Carl is my friend," said Gomez, with a chuckle, to BoxingScene.

"The first thing I asked him was, 'What's the date you guys are contemplating' and he said, 'May 12th'. I said, 'That's not going to work. We'll fight any other date - except May 12th. We already have plans for May 12th.'"

That date just happens to be when HBO will most likely air the pay-per-view replay between unified middleweight champion Gennady Golovkin and Mexican superstar Saul "Canelo" Alvarez and attach a live fight with it. Golden Boy would in essence be counter-programming itself.

Asked if another date in the summer might work, Gomez stated - "I would love to do the fight direct, I would love to do the fight in late May or June. I don't know what dates they have but late May or June we're open to. But going into the summer, look, Linares wants to fight Mikey Garcia, too. So if Mikey comes to the plate we have to consider him."

Gomez makes it clear - ''We're open to doing the Lomachenko fight but that date does not work for us. It's a bad date for us."

It's all on GBP now. The same GBP who stalled the GGG-Canelo fight for at least 12-18 months too long.

[QUOTE=Randall Cunning;18488130]@VasylLomachenko I know you are ready for May 12. Also I am too. I don’t want politics to interfere with our bout. I will tell my promoter @GoldenBoyBoxing no matter what will take…

@VasylLomachenko I know you are ready for May 12. Also I am too. I don’t want politics to interfere with our bout. I will tell my promoter @GoldenBoyBoxing no matter what will take the…

[QUOTE=_Rexy_;18485404]they can watch the damn thing on youtube any day or time. it's a stupid reason to cancel a big fight.[/QUOTE] What part of HBO always....ALWAYS does a replay of big fights don't you understand? of course HBO would have…

[QUOTE=_Rexy_;18485404]they can watch the damn thing on youtube any day or time. it's a stupid reason to cancel a big fight.[/QUOTE] They understand a lot of people will be viewing the replay, I'm with you by the time the replay…