Golden Boy Promotions’ matchmaker is very familiar with Jayson Velez because he was once one of the company’s fighters. Diaz knew Velez would give Garcia the rounds he desperately needed against an experienced opponent who wouldn’t just fall down after the first few times Garcia hit him.

Diaz, Golden Boy founder Oscar De La Hoya and Golden Boy president Eric Gomez were anxious to see how Garcia would react once an opponent took him into a second half of a fight. They were pleased overall by what Garcia gained from going 10 rounds for the first time, but Diaz admitted after Garcia beat Velez by unanimous decision in a fight ESPN2 televised from StubHub Center that their emerging 19-year-old contender isn’t quite ready for a title shot. 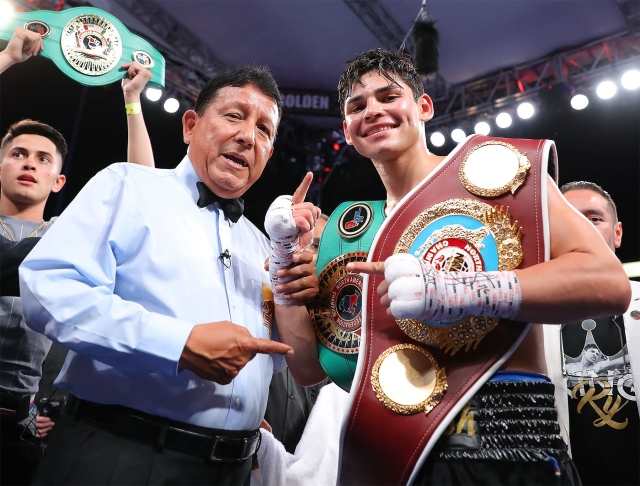 Garcia (15-0, 13 KOs) hasn’t been shy on social media about calling out 130-pound champions, most notably unbeaten Baltimore knockout artist Gervonta Davis (20-0, 19 KOs). Diaz doesn’t want to rush Garcia into anything remotely that challenging just yet and acknowledged that Golden Boy could “step him down” in competition for his next fight.

“If he would’ve knocked out Jayson Velez in three or four rounds,” Diaz said, “like he’s been doing the other opponents, who have been opponents, I would’ve said, ‘At the end of the year, let’s go for a world title. He’s that ready.’ He has the experience from the amateurs. [Friday night], I saw things that we need to work on and gradually get there. There’s no rush. I don’t wanna rush him into something.

“I want him, when he fights for the world title, to win the world title. He’s not ready. He’s 19 years old. At 20 years old, physically, he’s gonna get more mature. At 21, with the experience, with the fights and gradually getting him there, he’ll be ready.”

Before Friday night, Garcia had boxed beyond the fourth round in only one of his first 14 professional fights. His punch output remained steady throughout this bout, though, and Garcia demonstrated stamina by firing power punches at Velez right up until the final bell.

Diaz would’ve liked to have seen the fast-handed, strong Garcia throw more combinations and use his job more consistently against Puerto Rico’s Velez (26-5-1, 18 KOs). The Victorville, California, native showed some defensive vulnerabilities as well, but Diaz considered this an invaluable learning experience versus a veteran who has never been knocked out.

“Jayson Velez is coming off a very good win over JuanMa Lopez,” Diaz said of Velez’s 12th-round stoppage of Lopez on March 3. “Regardless of how faded or what, [Lopez is] a former world champion. Velez, he was a Golden Boy fighter. A clean fighter, comes forward, could take a punch, had never been knocked out. … I was nervous because the first thing that happens is if Ryan would’ve lost [Friday night], ‘Oh, Golden Boy pushed him too quick.’ And if Ryan would’ve knocked him out in the first round, ‘Oh, they put him in with another bum.’ So if he would’ve lost, [there would’ve been] criticism of Golden Boy and the matchmaker not knowing how to grow a fighter and moving him too fast. And they always say, ‘Oh, they put him in with another bum.’ They forget, he’s 19 years old.

“But I knew Jayson Velez, because he fought Jo Diaz and Alvarado, he fought for me for three or four years. I knew he couldn’t get knocked out in one or two rounds. And I said, ‘If it goes the distance, it’s great because it’s valuable experience,’ which he got [Friday night]. He got hit on the chin a couple times, he went 10 rounds, which a lot of people didn’t think he could go because he’s gonna get tired. And he learned a lot.”

First time watching him fight and for all his talk and hype, I wasn't impressed at all. He keeps calling out Tank but Tank would run through him. #EasyWork

[QUOTE=OCPancho;18745446]19? Pacquiao, Ben Villaflor, Pipino Cuevas and [B]Fernando Vargas won titles when they were 19 yrs old.[/B] But, let's not compare them to Ryan . Ryan is so full of hot air right now. His prospect of the year award…

19? Pacquiao, Ben Villaflor, Pipino Cuevas and Fernando Vargas won titles when they were 19 yrs old. But, let's not compare them to Ryan . Ryan is so full of hot air right now. His prospect of the year award…

[QUOTE=Caballarde;18744416]Wilfredo benites won a tittle when he was 17 years old but garcia is not ready?[/QUOTE] Benitez developed as a man faster, dummy.