SAN ANTONIO – Floyd Mayweather was much more involved than usual in Gervonta Davis’ preparation for his fight against Leo Santa Cruz.

Mayweather, whose company promotes Davis, played an active role in Davis’ training camp at Mayweather’s gym in Las Vegas, where Davis spent more than three months getting ready for this 130-pound title fight. Davis and his head trainer, Calvin Ford, would welcome Mayweather into the Baltimore native’s corner Saturday night, but it hadn’t been determined as of Friday morning if Mayweather would do that. 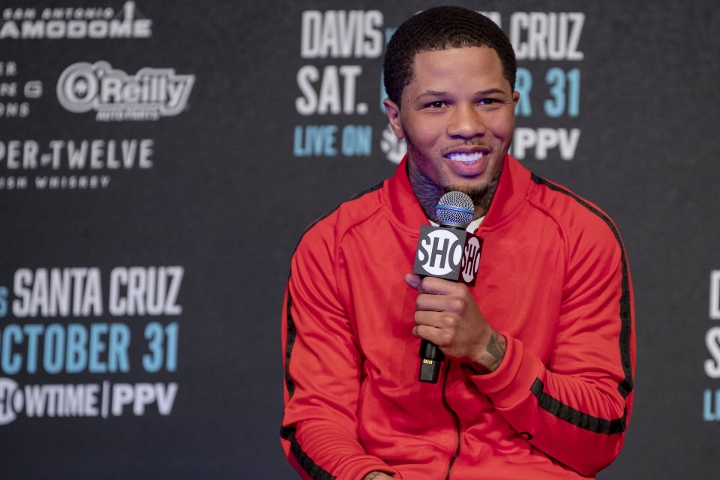 Even if Mayweather doesn’t work Davis’ corner in an official capacity, he’ll be seated nearby, yelling instructions throughout their Showtime Pay-Per-View main event at Alamodome. That’s what the retired superstar did during Davis’ 12th-round technical knockout of Yuriorkis Gamboa on December 28 at State Farm Arena in Atlanta.

In the opposite corner, Leo Santa Cruz’s confidence has been boosted because his father, Jose, is healthy enough to have traveled here from Southern California for the biggest fight of his son’s career. Jose Santa Cruz, already a cancer survivor, nearly died from COVID-19 over the summer, when he was hospitalized for a month.

Jose Santa Cruz won’t walk up and down the steps between rounds, but he’ll relay instructions to his son from their corner. Antonio Santa Cruz, Leo’s brother and assistant trainer, will face Leo in the ring between rounds.

“If my dad wasn’t able to be here with me, I don’t know if I would’ve even been able to fight because my mind wouldn’t be here,” Santa Cruz told BoxingScene.com. “I wouldn’t even have been able to concentrate because I’m used to my dad always being there with me. Just having his presence here is a great comfort to me. It’s a relief to have him here with me. I’m just happy and excited that he was able to come with me.”

[QUOTE=Roadblock;20848806]Floyd would be an asset in the corner just in his reading of the fight and tactics .[/QUOTE] Floyd wouldnt know how to relay that to tank in 60 seconds or less. You hear how he talks.

[QUOTE=TheBoxGod;20848093]Dont add floyd, he has no part of what make the wheel turn in your car (team) so leave him out. Floyd has his role and needs to learn how to stay in his lane.[/QUOTE] Floyd would be an asset…

[MENTION=148242]markther[/MENTION]: thumbs up! So many good trainer out but many will not match FMJr situational discretion he will take or instruct during fight to make fights easy n less damaging for boxers. He is a genius at adapting in there.

Dont add floyd, he has no part of what make the wheel turn in your car (team) so leave him out. Floyd has his role and needs to learn how to stay in his lane.

[QUOTE=Mario g;20847824]Well I'm sure Floyd will be there. Hes a attention seeking whore. Me, me, me. :bottle:[/QUOTE] ————— Floyd is the promoter of Davis. Oscar is the promoter of Canelo and Garcia. They get to be there on that basis…