Gervonta Davis: Lomachenko Would Have to Be Pay-Per-View Fight

Davis’ one condition is that it would have to be a pay-per-view event, so that he could try to make as much money as possible for that challenging fight. The powerful southpaw views himself as boxing’s next pay-per-view star and considers Lomachenko the perfect opponent to launch that stage of his promising career.

“If they’re ready to put it on pay-per-view, let’s do it,” Davis said Saturday night after his knockout of Jesus Cuellar. “If not, no.” 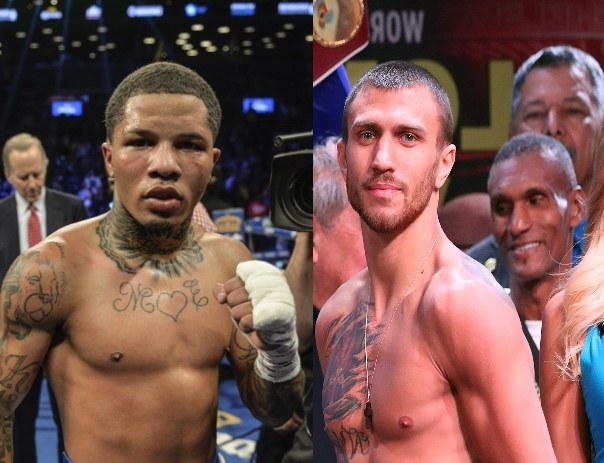 While unproven as a headliner, Davis displayed Saturday night why Mayweather, whose company promotes Davis, and others have such high hopes for him.

The 23-year-old Davis destroyed Cuellar (28-3, 21 KOs), a former WBA featherweight champion, in a scheduled 12-round fight for the WBA’s then-vacant “super” 130-pound championship. Davis dropped Cuellar once in the second round and twice in the third, when the fight was stopped at Barclays Center in Brooklyn.

Mayweather surprised fans and media two weeks ago, when the retired superstar said he is open to matching Davis against Lomachenko next. Mayweather previously was opposed to even discussing the idea of a Lomachenko-Davis fight.

“If Gervonta ‘Tank’ Davis win that fight [against Cuellar], I already spoke to Todd duBoef from Top Rank,” Mayweather told Showtime’s Jim Gray during an April 7 broadcast from Las Vegas. “We look forward to Gervonta ‘Tank’ Davis fighting Lomachenko after this fight. We know ‘Tank’ fights in April. Lomachenko fights in May. I already spoke to Top Rank, Todd duBoef, and we’re gonna make that fight happen between Lomachenko and Gervonta Davis.”

Before those discussions can commence, Ukraine’s Lomachenko (10-1, 8 KOs) must beat Venezuela’s Jorge Linares (44-3, 27 KOs) in their 12-round fight for Linares’ WBA lightweight title May 12 at Madison Square Garden in New York (ESPN). The 30-year-old Lomachenko – who’s commonly considered one of the top three boxers, pound-for-pound, in the sport – will attempt to win a world title in a third weight class when he challenges Linares.

Lomachenko would have to move back down from 135 pounds to 130 to face Davis.

“For me, it really doesn’t matter,” Davis said Saturday night. “I’m a fighter. But whatever my team – I have a great team. I think I have one of the best teams in boxing. If they’re up for it, they say so, I’m wit it.”

Lomachenko, a two-time Olympic gold medalist, hasn’t headlined a pay-per-view event, either. Most of Lomachenko fights have been broadcast by ESPN and HBO, and as part of pay-per-view undercards.

[QUOTE=Pugilisticuffs;18699388]Floyd said he wants a unification at 130 between Tank & Loma. He said that in some recent videos just after he dropped the Tank vs Loma is next bomb. He knows that Loma will be forced to vacate his…

[QUOTE=Fabes88;18699927]Crawford is number one for me but I understand your reasons for having loma as number one although I don’t rate the rigondeux win very highly for obvious reasons. If he beats Linares I’ll have him as number one too…

[QUOTE=chrisJS;18699035]Cueller is not as good as Vanes. Not saying Vanes is great but he's a level above Cuellar. Vanes would be the best name on Davis' resume. [B]You said Cueller could move up two divisions and beat Linares a week…

He wants to get paid well for that ass whooping

[QUOTE=Caught Square;18698420]It would probably bomb on ppv but if it that's what it takes to make the fight then make it happen, Crawford vs Postol was ppv.[/QUOTE] Guess you got a point there