Gervonta Davis: I Will Definitely Make The Weight For The Santa Cruz Fight

Gervonta Davis delivered a message Tuesday to the skeptics suspecting he’ll have another problem at the scale October 30.

“Gervonta Davis definitely will make the weight,” Davis told Showtime’s Brian Custer during a virtual press conference to promote his fight against Leo Santa Cruz on October 31 at Alamodome in San Antonio.

The unbeaten Baltimore native notoriously has had trouble making weight. The IBF stripped Davis of its junior lightweight title when he came in two pounds overweight for a 12-round, 130-pound championship defense against Francisco Fonseca, whom he knocked out in the eighth round three years ago at T-Mobile Arena in Las Vegas.

The 25-year-old Davis (23-0, 22 KOs) initially was 1¼ pounds overweight for his last bout, even though he moved up from 130 pounds to 135 for it. He eventually returned to the scale at 134½ pounds and stopped Yuriorkis Gamboa in the 12th round to win the WBA world lightweight title December 28 at State Farm Arena in Atlanta. 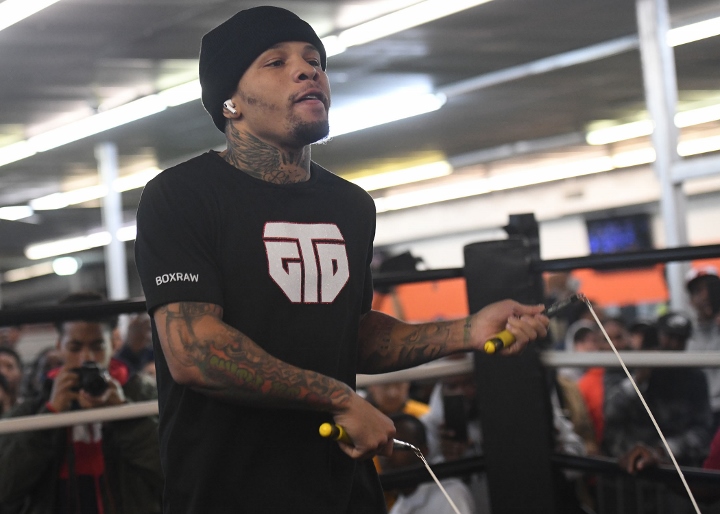 The Davis-Santa Cruz clash will be contested for Santa Cruz’s WBA “super” 130-pound crown. They’ll also fight for Davis’ 135-pound championship, despite that the contracted weight limit is 130 for their Showtime Pay-Per-View main event.

Cynics consider them fighting for Davis’ lightweight championship a backup plan to salvage Davis-Santa Cruz as a title fight in the event Davis comes in overweight again.

Davis dismissed talk of him potentially missing weight for his important debut as a pay-per-view headliner. The powerful southpaw pointed out that’s why he trained longer for this fight than usual and conducted camp at promoter Floyd Mayweather’s gym in Las Vegas.

When Custer asked him about possibly being drained due to moving back down to 130 pounds for this fight, Davis replied, “We just gotta wait and see. This camp been great for me. You know, I’m already at weight, as you could see. I’m not big. I’ve just been working hard. Our camp is not worrying about weight.

“Our camp is worrying about Leo Santa Cruz and giving him a great fight come October the 31st. That’s what we’re worrying about, and getting them big checks, that my team that put me in position whereas though I’m gonna be able to get them big checks. So, we just ready.”

Santa Cruz isn’t worried that Davis will show up to their weigh-in above 130 pounds.

The 32-year-old Santa Cruz (37-1-1, 19 KOs), a four-division champion from Rosemead, California, has boxed only once at the 130-pound limit. Santa Cruz won the WBA’s “super” championship at that weight in his most recent fight – a 12-round, unanimous-decision victory over Houston’s Miguel Flores (24-3, 12 KOs) last November 23 at MGM Grand Garden Arena in Las Vegas.

Davis vacated the title Santa Cruz won by defeating Flores when he moved up to lightweight to box Cuba’s Gamboa (30-3, 18 KOs).

[QUOTE=Ake-Dawg;20799504]Its a fair question when his previous fight was at 135 and you have been overweight before. If Canelo was fighting at 160 next, he'd get asked about weight given his last fight was at 175.[/QUOTE] Valid point however there’s…

[QUOTE=Al Broker;20800408]Actually it’s not about Davis being “huge” at all. Davis in fact is looking slimmer. Keep in mind that combat sportsmen vary in drain protocols. I think LSC will respect the 130 scale. Probably about 145lb fight night maybe…

I expect Tank Davis to make weight an show his full potential and wow the fans in attendance or who’s watching from home! It’s time to go after the top names, Leo, Ryan, Loma in 2023, then Haney

[QUOTE=Silver Spear;20800366]Yup, it was interesting that no mention was made to any fine etc if Davis does not make weight. Cruz will no doubt still fight even if Davis comes in huge because the money will be there for Cruz…