Gervonta Davis: Gamboa Fight Wasn't My Best Performance, It Was Bad For My Fans

Days away from the biggest fight of his career against Leo Santa Cruz on Oct. 31 on Showtime pay per view, Gervonta Davis is having a mea culpa about his most recent match.

Davis (23-0, 22 KOs) scored a 12th round TKO win over Yuriorkis Gamboa in December, but the feat came after the hobbled 38-year-old Cuban gold medalist hurt his Achilles in the second round, an injury that required surgery shortly after the fight.

Davis told Showtime's "All The Smoke," a digital show headed by former NBA players Matt Barnes and Stephen Jackson, that he wasn’t proud of his overall showing, even though he scored knockdowns in rounds 2, 8 and 12.

“I watched the Gamboa fight a couple of weeks later and I turned it off. That wasn't my best performance,” said Davis. “That's why now, I moved my training camp to Las Vegas [at Mayweather Boxing Club] so I can be able to put on a better performance. I think that was bad for my fans. I'm definitely coming back stronger and better. I will make it up for my last fight.” 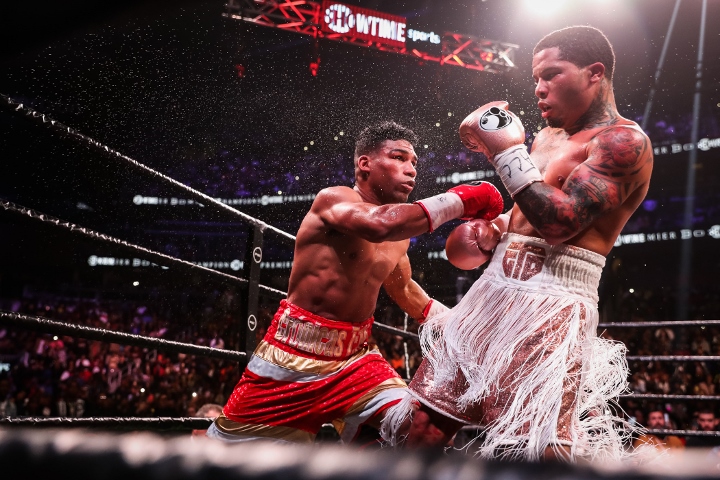 Davis was clearly not pleased with his output, even though he outlanded Gamboa 120 to 78. Gamboa, however, was the busier fighter with one bad leg, throwing 617 punches compared to 321 from Davis. Davis was impressive with his accuracy however and also connected on 48% of his power punches, per CompuBox.

At the Alamodome in San Antonio, Santa Cruz is expected to be a more staunch challenge for Davis in the super featherweight showdown.

“Leo Santa Cruz is my toughest opponent up to date. He's going to bring his best,” said Davis. “I know when it's time to get serious. I know how to focus no matter what's going on around me. That's what makes me so special.”

The fight will be contested at 130 pounds, and Davis wants to make sure he avoids any issues on the scales. Against Gamboa, Davis had to make weight in his second attempt. Davis has also missed weight in the past with previous opponents.

“I want to put on a great performance. I want to make weight the first time,” said Davis. “I don’t think it’s going to be a hard time for me making weight. I’m making it easily. I’m walking around close to 130. There is a penalty [for missing weight]. I don’t know what it is, but there is money involved. I’m definitely making weight, for sure.”

I want these young men to succeed, but excuse me if I pass on the drama. The biggest fight of Tanks career is making weight. Self awareness is a victory, he's too short at 135. I'll give him credit for…

Gamboa was a FAR past prime fighter with a name and a terrible chin in his best day. He was hand picked to make you look good and give you a good name on your resume. But once again, you…

Gamboa was a big tough guy - somrthing Davis wasn't get used to fight with.

Tank definitely had a lackluster performance against Gamboa. This being boxing most people only consider you as good as your last fight so he definitely has to show out against LSC