CARSON, California – Gervonta Davis’ fight Saturday night was so short, his handlers are contemplating bring him back as soon as some point in April.

Floyd Mayweather, Davis’ promoter, surprisingly suggested after Davis’ first-round stoppage of Hugo Ruiz that Davis could travel to Japan to face kickboxer Tenshin Nasukawa in a boxing exhibition when he fights next. That would be a lucrative yet peculiar move for Davis because Mayweather knocked down Nasukawa three times and stopped the 20-year-old star kickboxer in the first round of their boxing exhibition December 31 in Saitama, Japan.

Whomever and wherever Davis fights if he indeed competes in April, the left-handed knockout artist is expected to box in his hometown of Baltimore on an undetermined date in July. The 24-year-old Davis (21-0, 20 KOs) is popular in his hometown and cannot wait to fight there again. 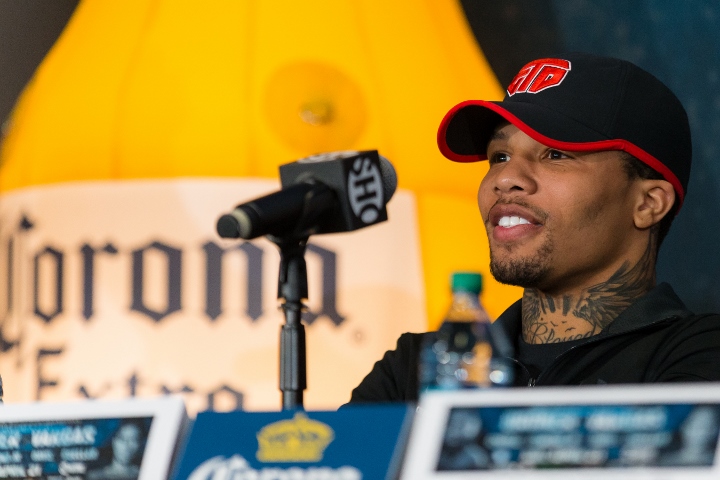 The preliminary plan is to have him headline a card at Royal Farms Arena in downtown Baltimore.

“I’m excited,” Davis told BoxingScene.com. “We actually have a lot of great talent in Baltimore, so I would like for all my young brothers that’s coming up behind me to fight on my card, show that Baltimore, we have a lot of talent. I’m excited to fight in front of my people, excited to show that there’s not only the Ravens and the Orioles, that I’m also big like that.”

The WBA super world super featherweight champion last boxed in Baltimore in July 2013. In just his fourth professional fight, Davis stopped Rafael Casias in the second round that night on the campus of Coppin State University.

He’ll return to Baltimore six years later as not only a two-time world champion, but as a source of motivation for Baltimore’s youth. Davis still trains at Upton Boxing Center, near the Pennsylvania Avenue neighborhood where he endured a very challenging childhood.

“They’re always asking me,” Davis said of his return to fight in Baltimore. “It’s long overdue. I haven’t fought in Baltimore since I was 4-0. I’m ready. I think it’s time now.”

[QUOTE=pillowfists98;19504107]July? He should be fighting next month. He didn't even go one round.[/QUOTE] [QUOTE=P4Pdunny;19504179]fight sooner though[/QUOTE] Agreed, they need to put him back in quicker due to this one round fight.

[QUOTE=MasterPlan;19503735]I thought he was coming back in May?[/QUOTE] Me too. Between the April exhibition, the May fight and homecoming in July it sound like he getting a real push to stay active

he should fight in dc lol fuk baltimore

Guaranteed his july opponent would be another pillow fisted gimp infant cherry that no one ever heard about... Its Embarrassing for his fans

Ia m not a Tank fan, but he has talent. He should be fighting more often. He could fight in Baltimore in a month or two against a top 10 to top 15 contender. Tank really needs to stay active…