SAN ANTONIO – Gervonta Davis delivered the type of short-circuiting shot in the sixth round Saturday night that even Leo Santa Cruz couldn’t take.

Davis viciously blasted Santa Cruz with a left uppercut that turned around Santa Cruz’s head and knocked him unconscious in his own corner. Referee Rafael Ramos immediately waved an end to their 12-round, 130-pound title fight in front of a frenzied, pandemic-restricted crowd of 9,024 at Alamodome.

The official time of the stoppage was 2:40 of the sixth round.

Santa Cruz lay motionless for several minutes before he eventually was helped to his feet. A concerned Davis came to his corner to check on him after that crushing knockout.

Santa Cruz was able to leave the ring on his own a few minutes later, but he was taken to a local hospital for observation.

Baltimore’s Davis (24-0, 23 KOs), who went off as an approximate 7-1 favorite, has now knocked out 15 consecutive opponents. Santa Cruz (37-2-1, 19 KOs), a four-division champion from Rosemead, California, suffered the first knockout defeat of his 14-year pro career in this Showtime Pay-Per-View main event.

Davis regained the WBA “super” 130-pound title he vacated last year to move up to the lightweight division. He also retained the WBA world 135-pound championship he won in his prior appearance, a 12th-round technical knockout of Yuriorkis Gamboa last December 28 at State Farm Arena in Atlanta. 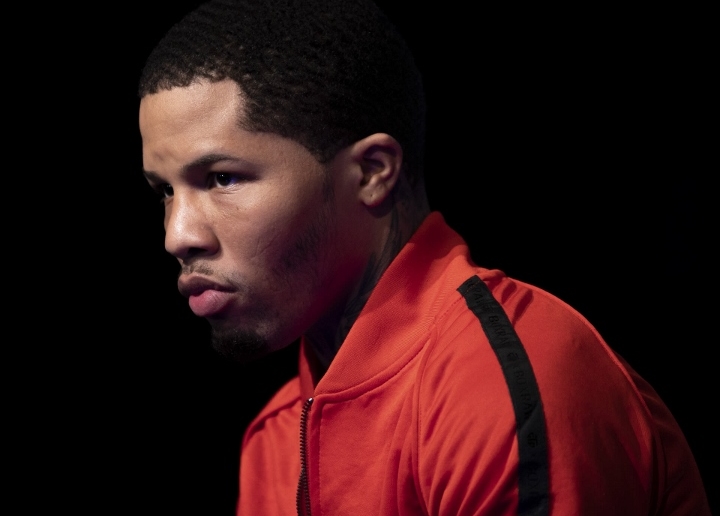 Davis, 25, and Santa Cruz, 32, fought for Davis’ 135-pound championship, despite that they couldn’t weigh in above the contracted limit of 130 pounds Friday afternoon.

Santa Cruz had his five-fight winning streak snapped. Before Davis defeated him, Santa Cruz had lost just a 12-round majority decision to Carl Frampton four years ago, a defeat Santa Cruz avenged in their immediate rematch in January 2017.

Santa Cruz hadn’t been knocked down before Davis dropped him since his 11th professional in August 2009. Santa Cruz told BoxingScene.com before facing Davis that the knockdown he suffered against Robert DaLuz was the result of him taking a knee once DaLuz landed an illegal rabbit punch.

He obviously hadn’t been hit, however, by an opponent as strong as Davis. Brawling with Davis at times worked against Santa Cruz as well.

“When we was watching ALL ACCESS [on Showtime], I thought he was gonna box more than actually go back to his old way of fighting,” Calvin Ford, Davis’ trainer, said. “That’s what makes Leo a great champion, because he’s always gonna fight. You understand? He did some things to ‘Tank’ that I didn’t like, you know, and ‘Tank’ was in the corner. Once we got ourself calmed down in the situation, he started seeing things, you know.

“That uppercut’s a shot we’ve been working on for a while. You know what I’m saying? If you look at the playback, you’ll hear me say, ‘Shoot the uppercut to the ceiling,’ and he threw it just right.”

Ramos called for a break in the action with 1:21 to go in the sixth round because he ruled Davis landed a low blow. Davis protested that the punch was legal.

Davis attacked Santa Cruz as soon as the action continued, but Santa Cruz courageously tried to fight him off. That’s when Davis blasted him with the shocking shot that knocked Santa Cruz unconscious.

A left uppercut and then a straight left by Davis landed about 30 seconds into the fourth round. Davis cracked Santa Cruz with a right hook soon thereafter, which got the crowd’s attention, as did another left uppercut a few seconds later.

Santa Cruz didn’t appear hurt by those flush punches and threw shots at Davis to halt his momentum. Ramos warned Davis for a low blow with about 1:10 to go in the fourth round.

Davis snapped back Santa Cruz’s head with a left hand 45 seconds into the third round. Davis hit Santa Cruz with a left to his body later in the third, but Santa Cruz came firing back with a combination that kept Davis from punching.

Another left uppercut by Davis landed flush with just over 30 seconds to go in that third round.

A left uppercut by Davis landed about 45 seconds into the second round. Davis grabbed Santa Cruz to stop him from coming forward with 1:20 to go in the second round and flung him to the canvas.

Santa Cruz backed Davis into the ropes late in the second round, but Davis slipped most of the flurry of punches Santa Cruz threw.

Davis caught Santa Cruz with a short left barely 20 seconds into their fight that got Santa Cruz’s attention. It didn’t take Santa Cruz a minute, either, to start exchanging with Davis, a tactic he admitted he needed to avoid before they fought.

Santa Cruz connected with a straight right hand about 2:05 into the opening round. Davis went down less than 30 seconds into that first round, but Ramos ruled it a trip because their legs got tangled before Davis fell to the canvas.