"Ali Akhmedov and Brian Ceballo have earned their way onto this undercard, but now they have to earn their right to move up and that won't be easy since they are both in deep.  They are in wars," said Tom Loeffler of GGG Promotions.  "The fans should see a lot of fireworks on June 8 from Israil Madrimov, Nikita Ababiy and Charles Conwell, as well.  They have a combined record of 15-0 with 13 of their victories coming by way of knockout."

In the co-main event, scheduled for 10 rounds, undefeated super middleweight contenders Ali Akhmedov and Marcus McDaniel will face off for the vacant WBC International Super Middleweight title.  Ahkmedov (14-0, 10 KOs), from Almaty, Kazakhstan, and one of the rising stars on the GGG Promotions roster, enters this fight having claimed six of his last eight victories by knockout.  McDaniel (15-0, 2 KOs), from New Orleans, enters this fight fresh from an impressive unanimous decision victory over Brian Vera in February. 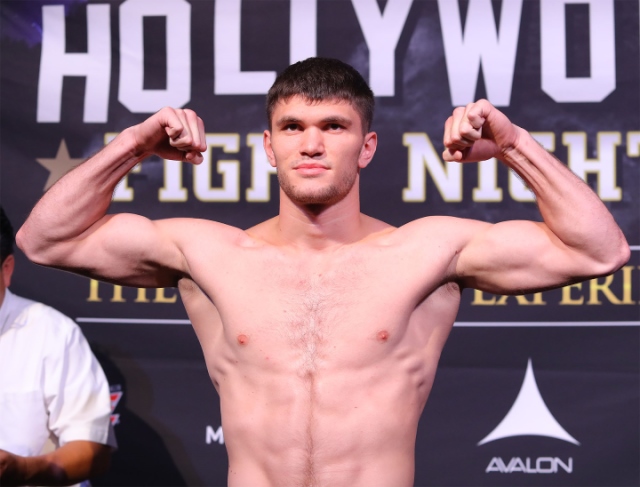 In a battle of undefeated Brooklyn brawlers, Brian Ceballo (8-0, 4 KOs) and Bakhtiyar Eyubov (14-0-1, 12 KOs) will be slugging it out in an eight-round welterweight battle for borough supremacy.  Ceballo, who has already fought twice this year, extended his undefeated record on April 10 with a third-round stoppage of Ricardo Garcia.  Eyubov also seems to be gaining strength.  His last victory was a seventh round TKO of once-beaten Nicholas Givan.

Matchroom Boxing's highly-touted prospect Israil "The Dream" Madrimov (2-0, 2 KOs), from Khiva, Uzbekistan, who has only fought in 10-rounders since turning professional, will risk his top-10 world-rating when he takes on battle-tested Norberto "Domino" Gonzalez (23-12, 13 KOs), from Monterrey, Mexico, in a 10-round super welterweight bout.

Former U.S. Olympian Charles Conwell (9-0, 7 KOs) from Cleveland, promoted by DiBella Entertainment, will be taking a big step up when he looks to end the three-year unbeaten streak of Brooklyn's Courtney Pennington (12-3-3, 5 KOs).  Scheduled for 10 rounds, they will be battling for the vacant USBA junior middleweight title.

The DAZN live stream will open with Matchroom Boxing's power-punching middleweight Nikita "White Chocolate" Ababiy (4-0, 4 KOs), from Brooklyn, in a six-round bout.  So far, only one opponent has made it to the second round, but not by much -- :26 seconds!  Ababiy's opponent will be announced soon.

The card will open with a non-televised four-round welterweight bout between local favorite Johnathan Arroyo (3-0-1, 1 KO) from Brentwood, NY and Jordan Morales, a veteran of 10 fights, from Sunbury, Pennsylvania.

[QUOTE=bronx7;19786209]WOW check out Rolls record on boxrec. Not 1 name I have ever heard of. Undefeated means nothing with record like this. Give young good fighters who fight good fights a pass for a couple of losses not ban them[/QUOTE]…

[QUOTE=crisantonio917;19786382]Absolute vomit for an undercard, great job Dazn and Eddie Hearn...[/QUOTE] Hearn has 2 prospects on this card. That's him only involvement.

Jermall Charlo is fighting Adams. This guy is fighting Rolls. Top fighters don't want anything to do with each other. What a sad sport.

Got some good matchups on this show with up and coming guys Akhmedov vs McDaniels looks solid, so does Ceballo vs Eyubov, all undefeated guys fighting each other I’m excited to see Madrimov also on this show