The world saw Gennady Golovkin lose for the first time last year against Saul Alvarez. Two of three judges said so and that’s all it takes.

Many people in the world would argue they still haven’t seen Golovkin beaten. Both decisions against Alvarez, particularly a draw in the first fight with one of the all-time awful scorecards, were met with debate. The debate was less the second time around.

Alvarez seemed to improve on their first outing. Golovkin did not. Is it a sign of an aging fighter? With each ensuing fight, that will be the question about Golovkin. He’s closer to forty than he is to thirty. At some point, the whole world will see him lose and be beaten.

Is Sergiy Derevyanchenko the man for the job (DAZN, 7 PM EST)? 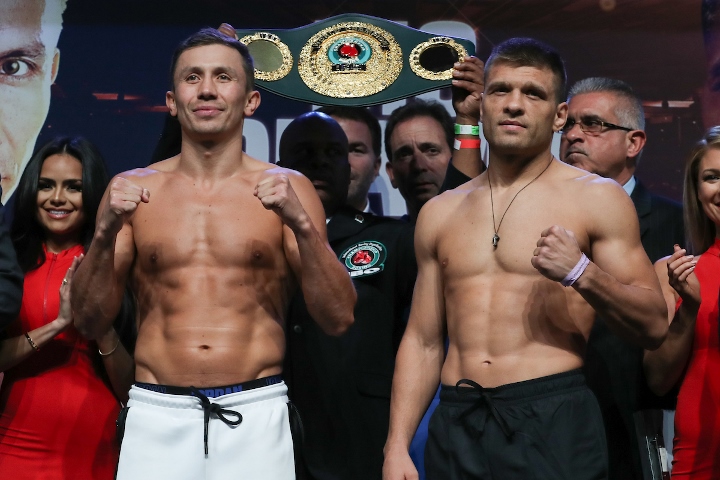 The Case for Golovkin: Golovkin showed in his last fight against Steve Rolls, and the fight between Alvarez encounters with Vanes Martirosyan, opponents below the real contender level are still there to be steamrolled. Where he’s struggled in spots since the Kell Brook fight is against fighters the next level up and above. Derevyanchenko might fit that mold but style wise could also play into Golovkin’s hands. Golovkin is taller, has a couple inches in reach, and maintains his hammering jab. Derevyanchenko will bring the fight to Golovkin, a strategy that has worked for few. Golovkin may find success with the uppercut here, as Daniel Jacobs did against Derevyanchenko, and there will be other countering opportunities over the top against a smaller man who sometimes over pursues.

The Case for Derevyanchenko: The underdog finds himself in his second IBF mandatory spot in a year, having only had to defeat Jack Culcay to earn a second title shot. It’s good work if one can get it. Derevyanchenko has more experience than his record indicates and brings a wealth of amateur experience. He jabs well, puts combinations together, and showed solid whiskers after suffering a first round knockdown against Jacobs. He might be a little slower than Golovkin and has to be careful not to be too predictable. If he can get under Golovkin’s jab, touch the body of the elder man in the ring, and land first, there will be real chances to win on Saturday.

The Pick: Those chances don’t feel overwhelming. Derevyanchenko doesn’t show off the sort of head movement that can throw off the timing of Golovkin’s jab and, while he has a good chin, so does Golovkin. This just feels like a fight where one guy has just enough edge in every category. Both were good amateurs. Golovkin was better. Both work well of the stick. Golovkin’s jab is a hammer. Both can punch, but Golovkin is one of the heaviest handed fighters of his generation. Until Golovkin shows more than hints of wear, he’s still the safest pick in the middleweight division outside of Alvarez. Derevyanchenko will make a good show of it though and last until late into the fight if not taking it all the way to the cards before defeat.