Gennady Golovkin is 'No. 1 Choice' For Callum Smith, Says Hearn

Back in September, Smith shocked the odds by knocking out number one seed George Groves to win the World Boxing Super Series super middleweight tournament. Groves was regarded as the top dog of the weight class.

Golovkin has also been out of the ring since September, when he lost his WBC, WBA, IBO middleweight belts by way of a twelve round majority decision loss to Canelo Alvarez in their pay-per-view rematch. 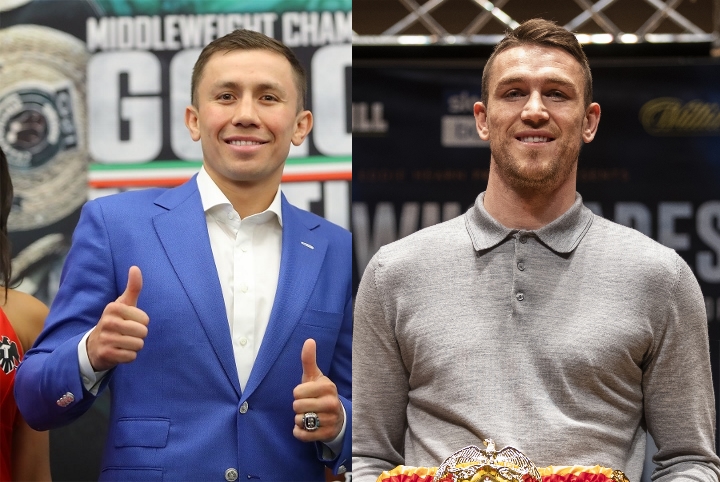 Hearn revealed that he's already spoke with Golovkin's promoter, Tom Loeffler, about staging that fight - which Hearn would like to schedule for a May date in the 54,000 seat Anfield, home of Liverpool FC.

"I've spoken to Tom Loeffler ['GGG's promoter] about it before," Hearn said, "not since the press conference last week though. That's my number 1 choice for Callum Smith.

"I think it's a fight that fills Anfield. It's a great profile fight, it's a great fight, full stop. Also, for Golovkin it gives him a chance to move up, do what 'Canelo' is doing, fight for the 'Super' title, and also for the 'Ring' magazine title at 168-pounds.

"If he [Golovkin] is even close to the mark in terms of weight at middleweight, it might be a good option. But whether he wants to take that risk before a possible third Canelo fight, I don't know."

A fight with Smith would also help Golovkin surpass the current plan of Canelo.

On December 15, Canelo is going up super middleweight to challenge Rocky Fielding for the WBA 'regular' belt at Madison Square Garden.

Smith is recognized as the true WBA champion as he holds the "super" title - and he holds a first round knockout of Fielding - so a win over Smith would place GGG in a higher position over Canelo, should the Mexican superstar defeat Fielding.

[QUOTE=_Rexy_;19278384]What about Mikey with Linares then?[/QUOTE] What about linares? Hes fighting Spence next ffs.

[QUOTE=kushking;19278022]If ggg was fighting someone better than Charlo then it'd be comparable to mikey,til then its all talk & ducking. Or should say silence & ducking.[/QUOTE] What about Mikey with Linares then?

[QUOTE=kushking;19278022]If ggg was fighting someone better than Charlo then it'd be comparable to mikey,til then its all talk & ducking. Or should say silence & ducking.[/QUOTE] Depends how you define 'ducking' I guess. For me it can only ever be…

[QUOTE=Koba-Grozny;19271214]Dude hasn't got a title, ergo he doesn't have a mandatory. The WBC have stipulated that he must beat Charlo[I] if he wants[/I] to be instated as mandatory to Canelo - but that is in no way a mandatory fight…