Garcia vs. Porter Winner Has To Make "Two" Mandatory Defenses

The head of the World Boxing Council, Mauricio Sulaiman, said the winner of the upcoming fight between Danny Garcia and Shawn Porter will be obligated to make two mandatory defenses.

Porter and Garcia will collide on Saturday night, for the vacant WBC welterweight title, at the Barclays Center in Brooklyn, New York.

Sulaiman is following the guidelines of the WBC's rules, which direct the winner of a vacant world title to make back to back mandatory defenses. 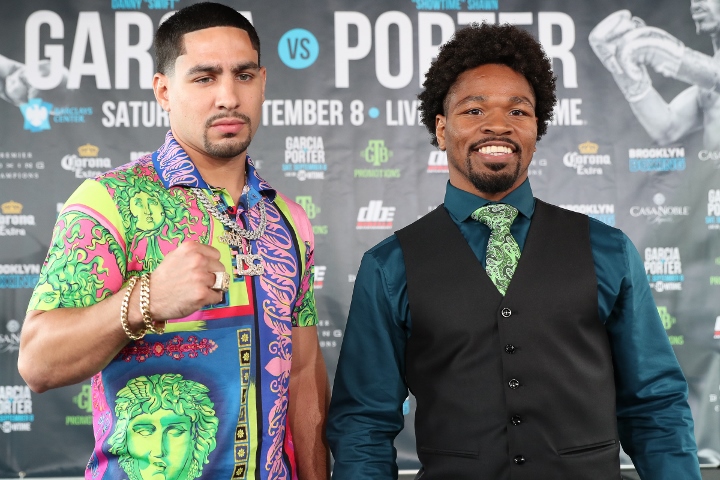 The belt became vacant earlier this year, when Keith Thurman dropped the belt - as the sanctioning body was pressing him with two mandatory defenses. Thurman was still recovering from injuries and he's been inactive since March 2017, when he won a split decision over Garcia to unify the WBA, WBC world titles.

Thurman was pressed to make mandatory defenses against Porter and Garcia - who were then ordered to fight for the vacant belt.

If Thurman will be healthy enough, Sulaiman says the former champion can get a direct shot at Saturday's winner.

"Thurman has the option to fight for the title if he is registering and ready," said Sulaiman to ESPN Deportes. "And if he is not ready, then he will be one of the mandatory challengers. On the one hand we have Andre Berto or on the other hand the winner of the fight between Yordenis Ugas and Cesar Barrionuevo."

The head of the WBC also stressed that Garcia and Porter will be a great fight.

"There's a very healthy rivalry in the corners, we're going to present the corner belt to one of the parents, it's an interesting fight. Porter is fast, has great boxing ability, Garcia had a significant win after losing with Thurman, so the coin is in the air [as to which of them will win the title]," Sulaiman said.

[QUOTE=WBC WBA IBF;19077553]Rematch clauses are hidden from the sanctioning bodies all the time. If the champion wins, no harm no foul. If he loses, the challenger knows the strip is automatic. In a voluntary defense, the challenger often has no…

[QUOTE=McDonough;19073808]Only guy that even remotely dodged Spence openly was Thurman. IMO, that wasn't even a duck. He told Spence he has to earn it and he's right. None of the rest have done or said anything so it's speculation. What…

[QUOTE=JcLazyX210;19076209]Wow! Damn. If they had to do all that then maybe the belts are just getting in the way. That's some shady stuff.[/QUOTE] Rematch clauses are hidden from the sanctioning bodies all the time. If the champion wins, no harm…