In fact, Garcia doesn’t even credit Redkach for beating the real Devon Alexander in his last fight. Redkach dropped Alexander three times and knocked him out in the sixth round of their June 1 bout, but Garcia noted that the version of Alexander that Redkach defeated didn’t resemble the Alexander who won world titles in the junior welterweight and welterweight divisions.

“He fought a good fight, but Devon’s not the same Devon Alexander from before,” Garcia told BoxingScene.com before the final press conference Thursday for their fight Saturday night in Brooklyn. “He can’t take a punch anymore and [Redkach] rattled him a little bit, and he finished him.” 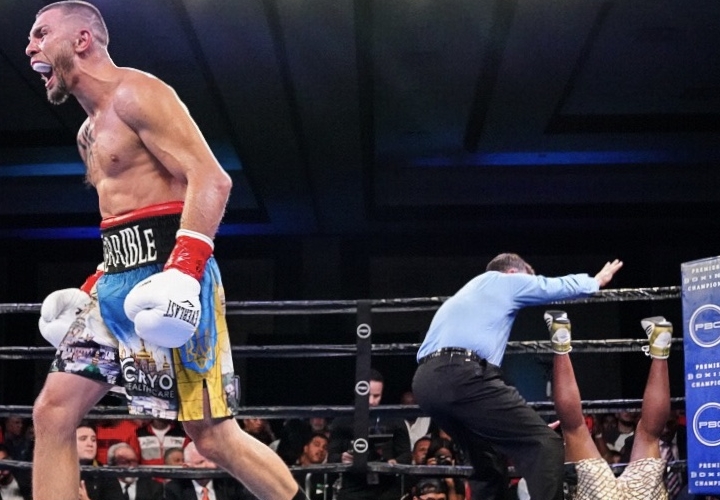 Redkach trailed Alexander by the same score, 48-47, through five rounds when Redkach cracked him with a left uppercut and then an overhand left that knocked Alexander to the canvas 27 seconds into the sixth round of their scheduled 10-rounder seven months ago. St. Louis’ Alexander got up, but the Ukrainian southpaw caught him with another left that floored Alexander again 25 seconds later.

Alexander reached his feet following that second knockdown, too, only to have Redkach send him to the canvas a third time with yet another left hand. Referee Thomas Taylor immediately waved an end to their fight once Alexander went down that third time at Soboba Casino Resort in San Jacinto, California.

That marked the first time in Alexander’s 15-year pro career that he lost by knockout. The 32-year-old southpaw’s previous losses to Timothy Bradley, Shawn Porter, Amir Khan, Aron Martinez and Andre Berto all were decision defeats.

However Garcia feels about Alexander (27-6-1, 14 KOs), Redkach’s victory over the former IBF welterweight champion in Redkach’s debut at the 147-pound limit moved the former lightweight contender into position to land this high-profile fight against Garcia.

[QUOTE=lion33lit;20347729]Seriously? Cause I’ll head over there after work to check out a live fight for free - no matter how potentially wack it turns out to be.....[/QUOTE] My older brother was doing demolition removal for a tenement and ran over…

[QUOTE=turnedup;20347296]Tickets are being given out for free for this fight. Just go by the arena, but they’ll only give you two.[/QUOTE] Seriously? Cause I’ll head over there after work to check out a live fight for free - no matter…

T Crawford should be in the ring wearing the WBO belt, ask the winner tonite, let's get it on and if Redkach wins, offer the fight to him cause we know Danny will never step up!