Garcia: Maybe I Needed This Type Of Performance For Pacquiao To Fight Me

NEW YORK – Danny Garcia is disappointed that he couldn’t knock out Ivan Redkach.

The former WBC welterweight champion hopes, however, that this unremarkable performance will give Manny Pacquiao or Errol Spence Jr. even more incentive to fight him next. Philadelphia’s Garcia, who was a 25-1 favorite to defeat Redkach, won by big margins on all three scorecards – 118-110, 117-111 and 117-111 – in a 12-round main event Showtime televised from Barclays Center in Brooklyn.

“I had a nine-month layoff, but there’s no excuses,” Garcia said during the post-fight press conference early Sunday morning. “I felt like I won the fight. I won the fight easy. I wanted the knockout. I didn’t get it and it is what it is. On to bigger and better things. Maybe this is the type of performance I needed for Manny Pacquiao or somebody else to fight me.” 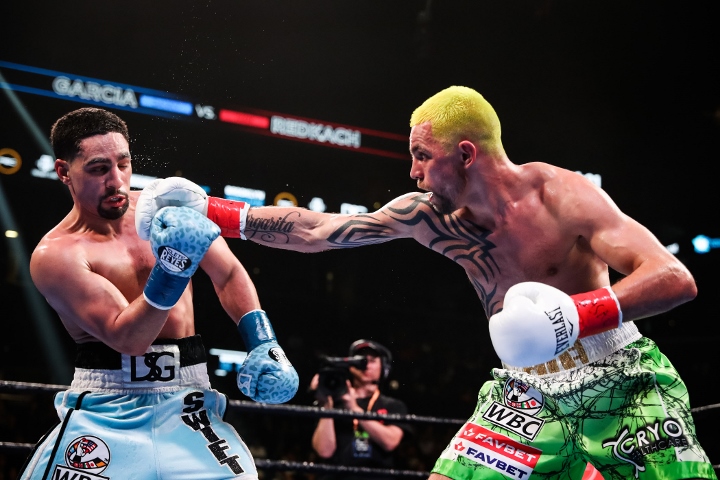 Garcia (36-2, 21 KOs) says he has no preference, that he would welcome either Pacquiao or Spence next in what would be a pay-per-view event later this year. The 31-year-old Garcia would be an underdog against the 41-year-old Pacquiao (62-7-2, 39 KOs), who owns the WBA welterweight title, or Spence (26-0, 21 KOs), who holds the IBF and WBC 147-pound championships.

Regardless, Garcia is certain that they paid attention to how he looked against Ukraine’s Redkach (23-5-1, 18 KOs).

“They’re probably gonna look at it like, ‘Yo, Danny should’ve stopped him, should’ve knocked him out,’ ” Garcia said. “But I won mostly every round. He’s a tough guy. You know, he’s coming off three [straight wins] and it’s the opportunity of a lifetime. And he took it serious. I know for him it’s probably a win because he did 12 rounds. And him and his coach [Jack Mosley], it’s probably a win for them.”

The 30-year-old Spence expects to face a top opponent in his first fight since suffering cuts to his face and dental damage in a one-car accident October 10 in downtown Dallas. Pacquiao likely will fight at some point late in the spring, when he has a break from his full-time job as a senator his native Philippines.

Garcia fought Redkach in part because, like Pacquiao and Spence, the onetime lightweight contender is a southpaw.

“Manny has a certain type of style that’s hard to train for,” Garcia said. “So, you’ve just gotta go in there and make adjustments. But definitely, when you’re fighting a southpaw you get that look and you have to slip punches different ways and pivot different ways, and punches come from different angles. So, it definitely gives you the right look to fight another southpaw.”

Coming off an injury or loss, been inactive, looked beatable in your last fight, a combo of any of these Perfect Pac opponent.

[QUOTE=Ca$ual Fan;20373776]Lol exactly. He feels he’s entitled for a payday when he’s done nothing but beat no hopers He’s gonna hide under his daddy’s skirt though and pretend Crawford doesn’t exist[/QUOTE] I dont understand it. His two big steps up…

[QUOTE=PAC-BOY;20373755]Manny vs Spence. Go fight Crawford if daddy Al will let you. WTF had Danny got to offer Manny?[/QUOTE] Lol exactly. He feels he’s entitled for a payday when he’s done nothing but beat no hopers He’s gonna hide under…

Manny vs Spence. Go fight Crawford if daddy Al will let you. WTF had Danny got to offer Manny?

[QUOTE=j.razor;20372261]Manny doesn't need to be fighting Errol or Bud cuz he might get hurt since he was hurt vs Broner & Thurman but with DSG at least he has speed on his side....I think Manny shouldn't be fighting anymore for…