Danny Garcia’s return to the win column was the most watched boxing event in April—but still lost in the shuffle of a busy sports weekend.

The former two-division titlist looked spectacular in dismantling Adrian Granados in seven rounds Saturday evening at Dignity Health Sports Park in Carson, Calif. The bout topped the latest edition of Premier Boxing Champions (PBC) on Fox, with the event drawing an average of 1.082 million viewers according to Nielsen Media Research.

The main event itself averaged 1.391 million viewers from the 9:45pm (ET) hour through the conclusion of the telecast. The bout peaked at 1.468 million viewers. 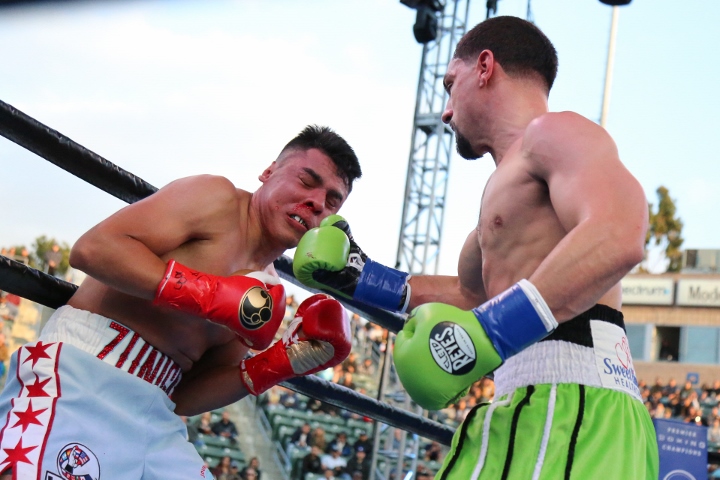 Viewership across all Fox Sports platforms—including Fox Deportes and the Fox Sports app—averaged 1.168 million viewers over the course of the two-plus hour long telecast.

While the in-ring result itself demonstrated Garcia’s capabilities in a talent-heavy welterweight division, the ratings performance for the entire telecast left a lot to be desired.

Saturday’s card marked 29% improvement over a similarly slotted show this time last year, when Josesito Lopez outpointed previously unbeaten Miguel Cruz in their own welterweight battle. That show produced an average of just 839,000 viewers, the lowest of any PBC card to air in primetime on any of the free networks.

The aforementioned show last April was among the last of a series of televised events under previous time-buy agreements PBC had with Fox, NBC, ESPN, Spike TV and Bounce TV. The deal with Fox began in Jan. ’16, with a then-unbeaten Garcia headlining the kickoff show in a 12-round win over Robert Guerrero to become a two-division titlist. The show averaged a robust 2.259 million viewers in the network’s first primetime telecast since 1998.

Upon the expiration of the aforementioned time-buy agreement, PBC and Fox Sports inked a lucrative multi-year deal last fall. The premiere of the rebranded edition launched last December, with twins Jermall and Jermell Charlo appearing in separate bouts.

That broadcast attracted a peak audience of 2,421,000 during the main event, which Jermall Charlo won by unanimous decision over late replacement Matt Korobov at Barclays Center. An average of 1,971,000 viewers watched that entire three-bout broadcast.

The January 26 edition of PBC on Fox remains the highest rated of the series to date, an event which was topped by the return of unbeaten welterweight titlist Keith Thurman following a near-two year hiatus.

Thurman’s hard-fought 12-round win over Josesito Lopez topped a live tripleheader which averaged 2.17 million viewers, peaking at 2.765 million viewers during the latter stages of the main event, which on its own drew a healthy average of 2.48 million viewers.

Both events greatly benefited from a heavy marketing push towards the tail end of the National Football League (NFL) regular season and—for the January 26 card—throughout the playoffs.

The latest offering of PBC on Fox not only lacked such marketing, but also ran against other boxing events as well NBA and NHL playoff coverage. Not helping matters any way the  the perception of this show being generally viewed as the weakest of the five primetime telecasts when first announced during a network rollout last November. The ratings reflect as such, finishing a distant fifth place among the lot.

Purchasing totals for the PPV event are not yet available as this goes to publish, although its lead-in preliminary card on ESPN2 averaged just 291,000 viewers.

[QUOTE=killakali;19685562]Nba finals are in June but nice try. There is always competition. No excuses. People just weren’t that interested.[/QUOTE] I didnt mean finals I meant playoffs. My mistake on that. I'm sure you probably could have guessed and corrected that…

[QUOTE=jonnyc420;19685438]That is true, still waiting for that PBC-made star to emerge. De La Hoya and Hearn at least have one each to their credit with Canelo and AJ.[/QUOTE] As a fan of PBC i have to agree.. Spence is the…

[QUOTE=killakali;19686129]No. Many people don’t have cable. Many have cut the cord or just don’t have a cable subscription. That’s why they have fox. That’s why he fox is in over 30 million more homes than ESPN. Nice try. If you…

[QUOTE=Motorcity Cobra;19686015]No. ESPN comes on a basic back cable package. Meaning if you get FOX on cable you also get ESPN. Showtime is a premium station. If you order cable you get FOX & ESPN but not Showtime.[/QUOTE]No. Many people…