After a 2½-year layoff cost Garcia an important part of his physical prime, the undefeated four-division champion just didn’t want to waste any more of his time. Rather than waiting for Lomachenko or the WBSS winner to agree to fight him, Garcia instead embraced just about the biggest challenge, literally and figuratively, that he could find.

Garcia couldn’t care less, either, that he is generally regarded as a huge underdog against Errol Spence Jr. The 31-year-old Garcia (39-0, 30 KOs) is confident he’ll exploit the bigger, stronger Spence’s flaws when they meet March 16 at the Dallas Cowboys’ AT&T Stadium in Arlington, Texas. 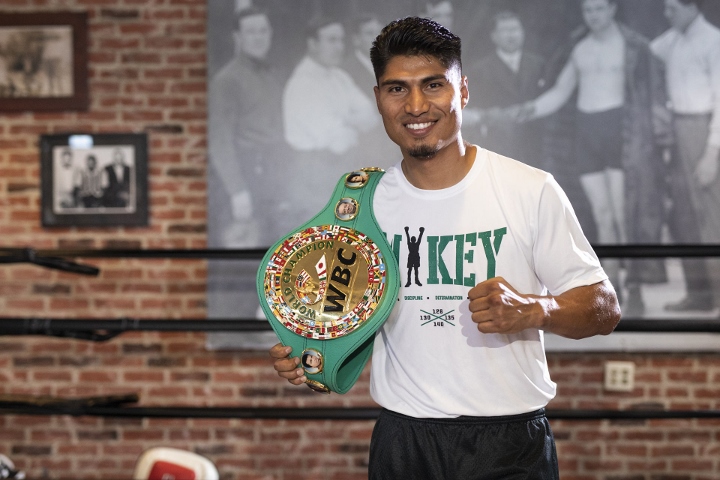 “That’s why I made sure I did everything to secure that fight, and I’m happy that we were able to work that fight. It was actually a pretty easy negotiation. I do thank his team and himself for accepting the challenge. I am challenging him. You know, he is the champion, undefeated champion, and he could’ve taken other fights as well. He could’ve taken other fights, but, you know, this fight makes sense for both of us. And that’s why I’m here.”

Garcia is in the Bay Area, where he’s working on strength and conditioning at Victor Conte’s Scientific Nutrition for Advanced Conditioning facility. He is preparing to move up two weight classes – from the lightweight limit of 135 to the welterweight maximum of 147 – to fight for Spence’s IBF welterweight title.

The Oxnard, California, native typically doesn’t do anything during training camp outside of roadwork and boxing training. For this training camp, however, the 5-feet-6 Garcia is adding muscle mass so that he can contend with the 5-feet-10 Spence’s strength and size when they square off in a FOX Pay-Per-View main event in two months.

Of course but who really thinks it’s not related? A titanium plate on one side and the other side broke

[QUOTE=Mister Wolf;19416180]Turns out "being your own boss" means being bribed into getting your head caved in by Al Haymon's blue chip fighter.[/QUOTE] :haha: Good one.

[QUOTE=pugil1st;19417388]Those are really poor excuses. Brook recovered and laced them up. He looked really good up till round 7. Spence battered him and that's it.[/QUOTE] That's not an excuse that's basically a fact, his best win is a man coming…

Mikey acts as though Hayman promised him some type of pre-gifted decision. Let’s hope Spence knows about it.

[QUOTE=LeonardBradley;19416711]We haven't really seen a fighter of this generation even attempt to attain greatness in his own division. [B]To jump 2 weight classed to fight that weight classes most avoided fighter is truly awesome.[/B] I am excited to watch this…