Fury Warns Wilder: I Wouldn't Take $50 Million To Step Aside!

According to Tyson Fury, there is no amount of money that would make him step aside from a planned rematch with WBC heavyweight champion Deontay Wilder.

Fury is back in the ring on Saturday night, at the T-Mobile Arena, against unbeaten prospect Otto Wallin. Fury is a massive favorite to win the fight.

And should Fury win, his next bout would take place in February, against Wilder. They initially fought back in December 2018, with the bout ending in a controversial twelve round split draw at Staples Center in Los Angeles. 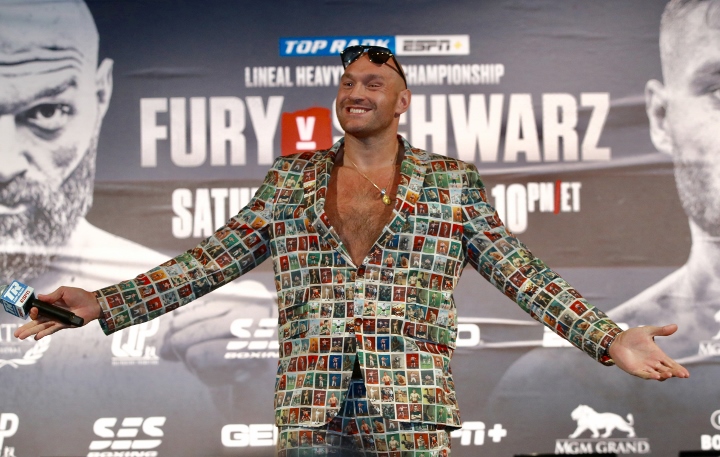 Wilder is heading to a rematch with Luis Ortiz, which is scheduled to land on a date in November. The first time around, he stopped Ortiz in ten rounds in March 2018.

In a recent interview, Wilder explained that he'd like to face the winner of the upcoming December rematch between Andy Ruiz and Anthony Joshua, who battle for the IBF, IBO, WBA, WBO world titles. Wilder believes Fury would be more than willing to step-aside.

But Fury denies that he would every consider the scenario of stepping aside.

"I've heard about Wilder saying he wants to pay me some step-aside money [for Wilder to face the winner of Ruiz-Joshua 2] but I wouldn’t take $50 million to step aside because it doesn’t mean that much to me. I only care about winning and victor," Fury told Gareth Davies of The Telegraph.

"I don't care if he’s got 104 belts. Belts are lovely things to have, to hold, to win. But it’s about more than a belt between me and Deontay Wilder, I want to beat the man himself."

Fury’s all talk. He would take the money, Bob would take it for him. Who do you think you’re fooling

[QUOTE=PotentialToast;20046533]Not if Wilder is signed to fight Fury.[/QUOTE] He can fight Fury then the unification if he wants. The mando wound just be ordered to be next.

Fury is the reason the 2nd fight has not already took place.

[QUOTE=Noelanthony;20046812]He will take a Rolex watch and a state of the art, fully loaded caravan. Don’t listen to him[/QUOTE] Never did never will It’s not to identify someone chasing money , mind you I would too in his position

I like Tyson but he's full of **** like Joshua. Both of those bums lie through their teeth all the time. Wilder scrambled furys brains and he took the easy way out to avoid an immediate rematch. We all know…