In a recent social media post, Marsellos Wilder, the younger brother of former heavyweight champion Deontay Wilder, made a sensational claim that Tyson Fury may have loaded his gloves for the rematch with Deontay back in February.

“You know it’s crazy when you [are] great. They gotta do everything that is underneath real to figure out how to stop you. And the most wicked sh-t about [it] is- people on your own team will do anything for the hate [or] money to help [the opponents] take you down. It was discovered by doctors that my brother has a dent [at] the side of his head [due] to a blunt object [striking] his head [in] his last fight. No glove or fist was able to cause the damage according to the autopsy. My daddy once told me if you pull a gun out on somebody, you better kill them. Because if you don’t, they are gonna come back and kill you. The king is about to rise again. We [are] coming for blood," Marsellos Wilder stated.

In the rematch, which took place at the MGM Grand in Las Vegas, Fury dropped Wilder twice and stopped him in the seventh round to capture the WBC world title. 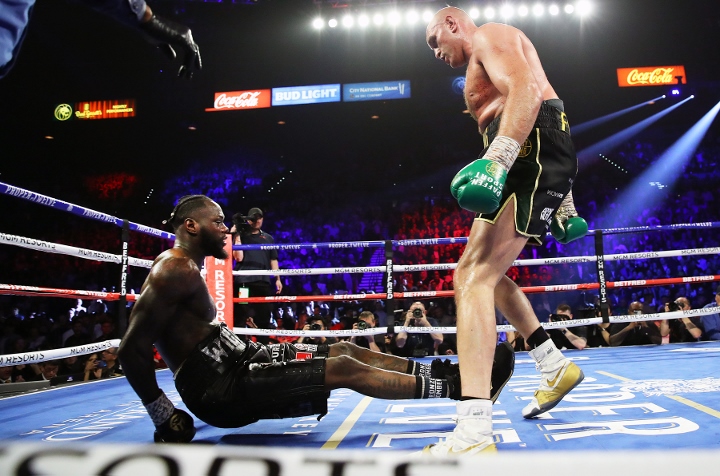 Fury hit right back at the allegations.

The "Gypsy King' is scheduled to face Wilder in a trilogy fight, which is being targeted for the end of the year. The first time around, in December 2018, they fought to a controversial twelve round split draw.

"This is just a quick video to address this foul play talk from Deontay Wilder and his team. I've just read an article saying I might have had some blunt objects in my gloves, yeah, two big 19st 7lb, 275lb destroyers in each glove," Fury said.

"Getting punched on the temple will do that to you, but not unless Deontay Wilder's own trainer Jay Deas is in on the conspiracy theory as well, along with all the Las Vegas state commission guys who never left the room. [Wilder's head trainer] Jay Deas was in the room when I had my hands wrapped; he examined them, he was in there when I had my gloves put on, and examined them - everyone else in the room too, they don't leave, we know this.

"Everybody citing foul play, bullsh-t; and next time I'll put a dent in his boxing career and end it because it will be two knockout losses in a row and bye, bye forever."

In the direct aftermath of the loss, Wilder claimed a heavy ring-walk outfit had weakened his legs and left him without any energy by the third round.

[QUOTE=Densuo;20638913]The first fight was Fury winning and Wilder keeping up with Knockdowns. The second fight was an asswhooping. There's no reason to believe the 3rd won't be another whooping unless Wilder gets lucky.[/QUOTE] And what will you say when Wilder…

[QUOTE=Cool Scant;20638730]anyone who uses your excuse as to why their was no foul play on Furys behalf obviously has an agenda.[/QUOTE] "Excuse"? :lol1: The burden of proof is on the accuser (i.e. Wilder, and his Wilderettes like you). [QUOTE=IRONCHINHAGLER;20639685]When u…

[QUOTE=Cool Scant;20639512]so you’re saying that since the opposite trainee was in the dressing room that theirs no what fury couldn’t cheat? Based on all of your statements you have an anti wilder bias. Bad part is you’re probably right. Fury…

[QUOTE=Roberto Vasquez;20640917]That's like saying a magic trick was real because the audience member inspected it before and afterwards. You probably think he actually ate uncastrated wild boar because at the time his meat supplier confirmed he did... You keep addressing…