Recently named trainer SugarHill Steward believes the mystique and technique of the famous Kronk Gym in Detroit will provide Tyson Fury the secret sauce in his forthcoming fight Feb. 22 against Deontay Wilder at the MGM Grand in Las Vegas.

‘We’re going to give him that punching power. It’s a Kronk secret. The Kronk style produces knockouts,” Steward told BoxingScene.com in an interview. “He wants to be more of a well-rounded fighter, and that’s why I was brought in … He’s elusive, and not getting hit is one of his greatest attributes. The art of boxing is to hit and not get hit.” 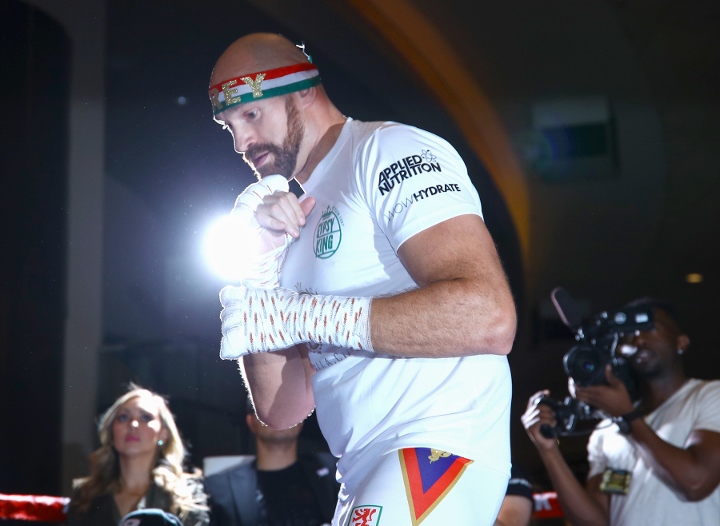 Steward said Fury has been training with headgear for the first time in his life. He wants to protect the right eye that required 47 stitches in his last fight against Otto Wallin. They want to prevent it from taking any damage and potentially opening the cut, and thus, saving the match from a cancellation.

“The two fighters will not need much of a feeling out process,” said Steward. “They are not intimidated by each other. Two of the elite fighters in the world looking for the score-settling win … He seems to be in a happy place now. Staying in the gym and training is his rescue. It’s therapeutic.

Steward said Fury escapes his history of mental health problems by constantly training, even when he’s not preparing for a fight.

Steward also noted his recent union with Fury has already led to some weird conversations. He said he got a call from a sports psychologist to be trained on how to train Fury mentally.

“I don’t need a therapist to help me train my fighter,” Steward quipped. “It’s part of my job to be in the fighter’s head as well. I know what makes him laugh, sad and cry.”

[QUOTE=MisanthropicNY;20358003]Really? Who has Wilder knocked out that's on Fury's level of pure boxing and movement? You're asking Wilder to do something he hasn't done, and he was schooled by Fury for 10 rounds the last fight.[/QUOTE] Who is another HW…

[QUOTE=MisanthropicNY;20358003]Really? Who has Wilder knocked out that's on Fury's level of pure boxing and movement? You're asking Wilder to do something he hasn't done, and he was schooled by Fury for 10 rounds the last fight.[/QUOTE] Bruz he was half…

[QUOTE=Deontay Wilder;20361624]Deontay just met a 2,300-year-old Champ during his visit to Rome. Wilder got the ancient warrior spirits on his side. War Bronze Bomber! February 22! [/QUOTE] Maybe I was…

Quote: Originally Posted by PunchyPotorff Boxing has been around 3000 years? And you have video to prove this? LOL [QUOTE=Marchegiano;20361935]I was giving you a big scope for wiggle room. We both know there is only one ever in gloved boxing…

[QUOTE=PunchyPotorff;20361548]Boxing has been around 3000 years? And you have video to prove this? LOL[/QUOTE] I was giving you a big scope for wiggle room. We both know there is only one ever in gloved boxing history and he's far from…