Tyson Fury (27-0, 19 KOs) is far from impressed with the unbeaten record of knockout victories that were achieved by WBC heavyweight champion Deontay Wilder (40-0, 39 KOs).

Wilder has knocked out every boxer that he ever faced in the ring. He went the distance once, with Bermane Stiverne, in 2015 - but then knocked him out in a single round in their 2017 rematch.

Fury will challenge him for the title in the main event of a Showtime Pay-Per-View card, likely on a November date in Las Vegas. 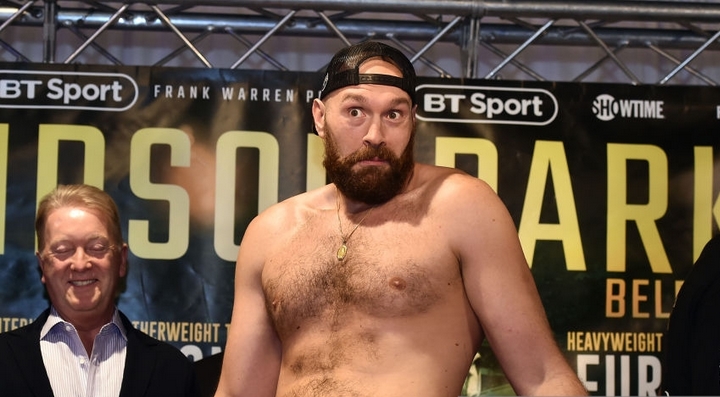 It was the second fight in Fury's comeback after snapping a long layoff in June of this year - which was Fury's first bout since November of 2015 when he shocked Wladimir Klitschko in Germany.

"If I'm as good as I think I am, if I'm this great heavyweight I keep saying I am, then I only need two fights to come back," Fury told Gareth Davies of The Telegraph.

When reviewing Wilder's record, Fury gives him credit for the March knockout of Luis Ortiz - but he also indicates that Ortiz is much older than his claimed age of 39.

Based on Wilder's record of wins, Fury is more confident of winning the WBC title in the fall.

"[Johann Duhaupas is] a French journeyman beaten by everybody; [Eric Molina], who is, relatively, a bum, too"; [Gerard Washington is] the lad with no guts on him, the tall fella. A novice who was afraid of getting hit," Fury explained.

"Luis Ortiz is the best man he fought but Ortiz is George Foreman's age. Ortiz was a very good win, but Ortiz is a very old man in sports terms. Even Ortiz nearly had him out of there.

"We will take over Las Vegas. And I will bring the belt home. We will rule Britannia once again. And then it will be on to Joshua."

[QUOTE=1hourRun;19042872]You have no idea or a clue whats considered good at HW : I don't have time to break down the individual resumes of the names I shared with you all but, we are talking about legitimate contenders -- ranked…

[QUOTE=1hourRun;19042872]You have no idea or a clue whats considered good at HW : I don't have time to break down the individual resumes of the names I shared with you all but, we are talking about legitimate contenders -- ranked…

[QUOTE=1hourRun;19042962]Some of us remember that Vitali had to restore honor to the Klitschko name and avenge the shame of Ross Purritty. And these guys are on me about Audley Harrison? I bet they wont say nothing about this. :beerchug: Must…

[QUOTE=BillyBoxing;19042896]There you went too far. The only mess big bro cleaned up for Wlad is Sanders. Wlad avenged himself his loss to Brewster and cleaned up the division. [/QUOTE] Some of us remember that Vitali had to restore honor to…

[QUOTE=Dle;19040066]Ok, King Kong’s an old monster but why do you think he was ondefeated and the most avoided heavyweight challenger? Even you avoided him.[/QUOTE] Lolx... If he was avoided, then who has he been fighting? Retired footballers? Uber drivers?