Joshua retained his world titles last month, when he knocked out mandatory challenger Kubrat Pulev in the ninth round/

Fury captured the WBC title back in February of last year, with a seventh round stoppage of Deontay Wilder.

At the moment Wilder is attempting to enforce an immediate rematch clause, which Fury and his handlers believe had expired back in October. 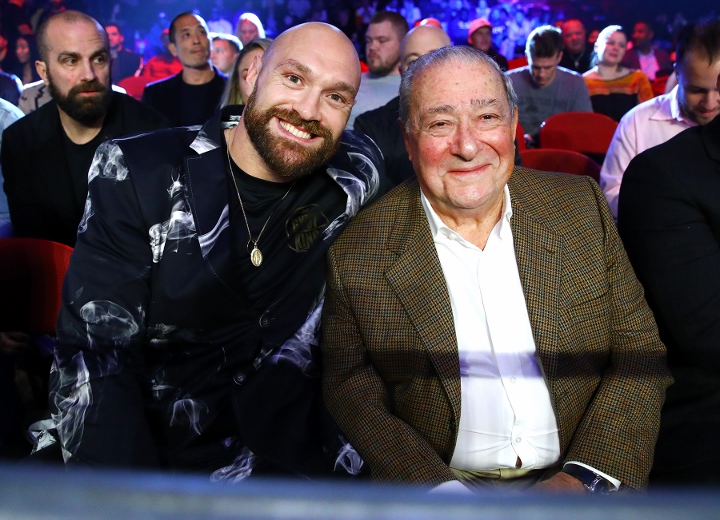 Due to the coronavirus pandemic, the location is unknown at the moment - but both sides have to be in full agreement on where it lands.

If a deal is reached, the date is likely to come down in either May or June.

Arum hopes everything will get wrapped up in the next few weeks.

"I don't want to make a deadline, but I just can report that everything so far has been going splendidly, and we hope to have a signed document within the next couple of weeks," Arum told Sky Sports.

"That might not provide for a site, because again, we can have a document that the fighters would have signed, and everything, and then have a mutual agreement clause of the site. We're all on the same page, as far as I can see. I'm 95 percent confident the fight happens, and I'm 100 percent confident that my guy wins, and wins by knockout."

Joshua's promoter, Eddie Hearn, is speaking with several countries regarding the location.

The two sides are also discussing an undercard where Top Rank fighters collide with those from Matchroom.

"We talked about the undercard and Eddie made a really good suggestion - that we have Matchroom fighters against fighters from our side," said Arum. "That would be pretty good. It would be interesting."

[QUOTE=REDEEMER;2101553]You just described yourself my friend not including being old ,I find that hard to believe to . It’s clear Arum isn’t lying by the details Hearn is feeding us because it collaborates with Arums statements,they wouldn’t plan some schemes…

[QUOTE=Bronx2245;21015127]Exactly! Eddie wants Haney vs. Garcia, so he says "Tank vs. Garcia can't be done!" However, if it were Charlo vs. Andrade, then suddenly, that could be done![/QUOTE] But it isn't up to Eddie if that fight comes off because…

[QUOTE=Oshio;21015601]In the part where I come from old people are not known to tell lies. Don't know about the US or UK.[/QUOTE] Ever hear of Shelly Finkle ? This man once claimed meetings to talk negotiations with another promoter in…

In the part where I come from old people are not known to tell lies. Don't know about the US or UK.