Fury: When I Kicked Klitschko's Ass - I Became Heavyweight King

Tyson Fury has no doubt that he remains as the top dog to beat in the heavyweight division.

Back in November of 2015, Fury shocked the sport when he traveled to Germany and won a twelve round unanimous decision over Wladimir Klitschko.

But then Fury took off for over two years, due to substance abuse issues and other problems related to his mental health. 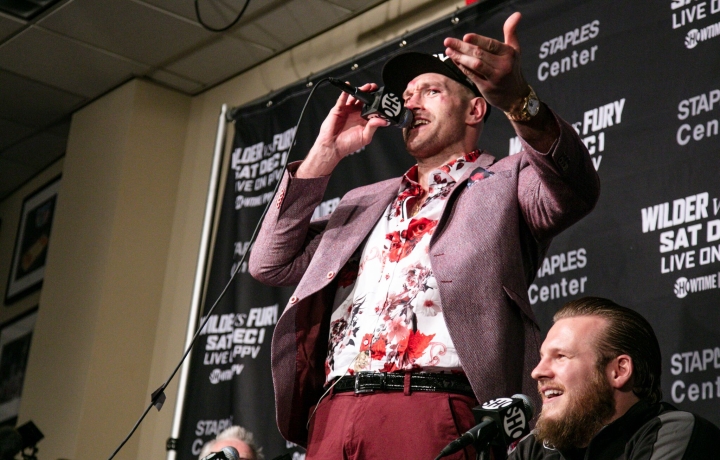 Fury returns to the ring on June 15th, when he makes his Las Vegas debut against unbeaten Tom Schwarz at the MGM Grand. The bout will be the first for Fury under his new deal with Top Rank and ESPN.

Schwarz is a tremendous underdog, but Fury is expecting a very tough fight.

“It is something I am enjoying as an athlete, a person and boxer,” Fury said.

“I really love my job at the minute, more than I have ever done before. I used to think boxing was a chore, a job to go to. I trained hard for a fight and then put a ton of weight back on. Now I enjoy what I do, keep fit even when I am not boxing. I almost live my life as a routine training camp.

“[Schwarz] is not ill-preparing for this and turning up for a paycheck. He is turning up to take the lineal championship of the world. It will be an epic fight – it’s Las Vegas, it’s showtime and I will look to put on an explosive performance in the States.”

[QUOTE=-Scott.Weiland-;19765357]Whatever happened to that Jewish reptile who admitted to ruining Fury’s life ?[/QUOTE] The Jew-reptile was last spotted on the spacecraft Milano, sources revealed he has traveled back in time to reverse the Klitschko's vs. Fury ruling for the good…

[QUOTE=1hourRun;19739884]This fraud's mental illness is now being exploited by what Tyson claimed was taking over his brains in 2016 '' a Reptilian-jew from another dimension '' ( his word not mine) . When Bob Arum found out that Tyson Fury…

Lol@ "Schwarz is a tremendous underdog, but Fury is expecting a very tough fight."

He land in good combination on the ropes hook and straight punch test of the fight all he did was butter bean movement! Not one exciting moment kick his ass lol sure Tyson wish you beat him like AJ

[QUOTE=DreamFighter;19741261]When in the past people have beaten 38 year old guys noone claimed it was some great win. It was a good win for tyson at the time purely because he had nothing like it in his resume, not even…