Fury: I Came To ESPN To Make Wilder Rematch As Big As Possible

Tyson Fury has never been one to mince his words. On Monday, he let his clothes do the talking before he even had a chance to open his mouth.

The unbeaten British heavyweight made the rounds on various ESPN platforms, strutting his stuff in a custom-made suit bearing the images of all of the lineal heavyweight champions throughout boxing history.

“I don’t see Deontay Wilder on here,” Fury pointed out to the panel during his segment on ESPN’s First Take. “If he ever wants to be on this thing, he’s got to beat me.” 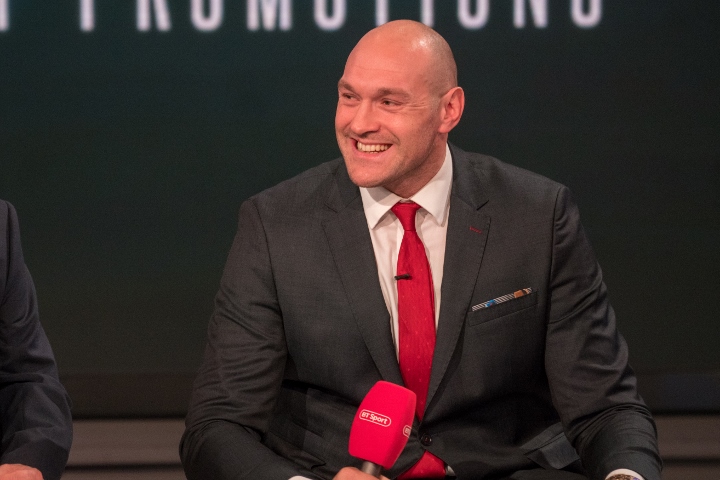 Fury (27-0-1, 19KOs) earned the lineal championship with a stunningly lopsided 12-round win over long-reigning king Wladimir Klitschko in Nov. 2015. The feat ended Klitschko’s lineal reign after more than six years, also putting to a close his second tour with at least one major title around his waist which extended back to April 2006.

Whether he still holds ties to that championship depends on whom you ask. Most historians consider his having severed all ties with the sport in 2016—following battles with drug, alcohol and mental health—rendering the crown vacant. Others—particularly those with a vested interest in his career—still claim him as the reigning World heavyweight champ.

Regardless, Fury proved he still belongs among today’s heavyweight elite following an impressive showing versus Wilder last December. The two fought to a disputed draw, with Fury winning the majority of the rounds but also suffering a pair of late knockdowns to muddy the waters in the end.

The late thrills in their Showtime Pay-Per-View headliner—coupled with the inconclusive ending—served as proper motivation to run it back, with the two sides seemingly close to a deal earlier this year. Fury and his team—promoter Frank Warren and managerial outfit MTK Global—threw everyone for a loop, however, in bailing on the proposed offer and instead signing a multi-fight deal with Top Rank and ESPN.

Wilder (41-0-1, 40KOs)—who moved forward with a mandatory title defense versus Dominic Breazeale, whom he annihilated in one round this past Saturday—has long served as a centerpiece of Al Haymon’s Premier Boxing Champions (PBC) conglomerate. As Haymon and Top Rank founder and CEO Bob Arum rarely do business together, Fury’s political alignment figured to kill any such hope for a rematch.

The 30-year old heavyweight doesn’t see it that way, explaining his true intention for joining the ESPN family.

“On Showtime, it wasn’t viewed by that many people. I think it was only 325,000 (PPV buys),” Fury pointed out, although the figures don’t accurately portray just how many fans actually saw the fight. “A world heavyweight title fight with two of the most colorful, charismatic champions in the past 50 years… it needs to be built bigger.

“I believe this platform on ESPN will give me that option to make it a massive global fight, not only 300,000 (-plus) in the United States. I think another 450,000 viewed it in the United Kingdom. We need to make it bigger.”

His debut on the platform comes June 15 versus Germany’s Tom Schwarz. The fight will stream live on ESPN+, which isn’t quite the same as airing a fight on ESPN’s linear platform which boasts nearly 30 times the viewing audience.

Still, the Disney-owned company is going all in for the show, already promoting the event as witnessed by Fury making the company rounds on Monday. Additionally, the ESPN+ card will be preceded by a live telecast on ESPN2.

Once he takes care of business in June, Fury—with ESPN backing—is prepared to return to reopening conversation that would give his old friend a chance to have his picture added to that fancy lineal championship suit.

“If (Wilder) wants a rematch, I’m sure we’re gonna get it on,” Fury believes. “I didn’t come here and sign a deal with ESPN so I can fight bums.

“I came here to make the fight as big as possible.”

Anybody that believes he went to ESPN to get fight I have some swampland in Florida to sell you.

Could have taken a better in between fight though, and they have the nerve to put it on PPV too.

Only one making the rematch bigger is Wilder. Fury won according to most and he charismatic asf. Fighting a nobody aint gonna do shyt to sell the rematch

[QUOTE=sicko;19760613]I like Fury...but that makes absolutely NO SENSE! Nothing wrong with taking the ESPN deal it provides Security and Guaranteed money for him and his Family but SAY THAT! Stop with the "It Went To ESPN To Make The Wilder…

[QUOTE=angkag;19760607]Thought you were talking about Boy George there for a split second. Fury got nothing on George Foreman, but let Cus D'Amato do the talking: [I] It would take a supreme world-class chin and the ability to absorb bone crunching…