When it was suggested to Fury that the way he boxed during his 10-round, unanimous-decision victory over Francesco Pianeta didn’t exactly excite the capacity crowd at Windsor Park, an incredulous Fury disagreed.

“Well, I don’t know what fight you were watching, because the crowd loved every minute of it,” Fury told BoxingScene.com during an interview in his locker room. “And I thought I boxed like Sugar Ray Leonard in there. Never took a blow over 10 rounds against a man who’s lost four fights in 40 pro fights.

“And I’d like to see if you could do any better in there with Francesco Pianeta, because he’d knock you spark out. So you say my performance was a dull performance. It was a f***ing great performance. And I don’t know what you’re watching. And I’ll knock Deontay Wilder spark out for you.” 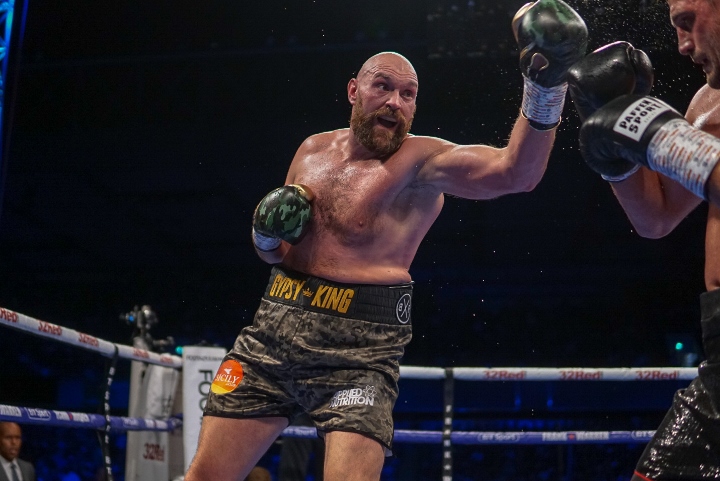 Referee Steve Gray, the sole judge of their 10-round fight, scored every round for Fury (100-90). Pianeta has been knocked out by Wladimir Klitschko, Ruslan Chagaev and Kevin Johnson, but the 6-feet-9, 258-pound Fury felt good about getting in much-needed rounds before challenging Wilder for his WBC heavyweight title later this year.

“Listen, I got a good 10 rounds in here tonight – exactly what I wanted,” Fury said. “We was happy with that. It looked great on TV. It was a great, slick performance. I didn’t get hit with any punches. Look at me face. Not a mark on me. We both got out of the ring safely. That’s the best thing. And on to the next fight now.”

Frank Warren, Fury’s promoter, said following Fury’s win against Pianeta that the date and the Las Vegas venue for the Wilder-Fury fight will be revealed this week. The bout between Wilder (40-0, 39 KOs), of Tuscaloosa, Alabama, and England’s Fury will headline a Showtime Pay-Per-View event.

I saw a video of Fury going off on Radio Rahim for saying the fight wasn't exciting. Was pretty funny. He also asked Fury his tactics for the Wilder and Fury was telling him he wouldn't tell him as he'd…

[QUOTE=SuperHanz;19035249]Obviously a bunch of pissed up Irish are going to boo if they don't see a brutal KO. That's the problem with a lot of boxing 'fans' [B]they can't appreciate the sweet science[/B].[/QUOTE] Lol don't sink to the levels of…

[QUOTE=BigZ44;19035217]So why were they booing?[/QUOTE] Probably booing p ianeta. But fury won't want De ontay to see 12 rounds as he can put fury to sleep at any moment. But I wonder if Fury can get rid of ring rust…