Fury Confident 'Judges Will Do The Right Thing' in Wilder Rematch

Tyson Fury remains even more confident of winning a rematch than he is in the belief that he beat Deontay Wilder the first time they met.

The pair of unbeaten heavyweights appear ready to finally to settle the dispute in the ring. Fury revealed during a promotional tour on various ESPN shows plans in place for their anticipated rematch to take place Feb. 22. Sources from both fighters’ camps confirmed the working date to BoxingScene.com, although there remain several details to work out, along with the need for each to win their next scheduled fight.

“If we both get through our next fights, we’re going to fight February 22 in the rematch.” 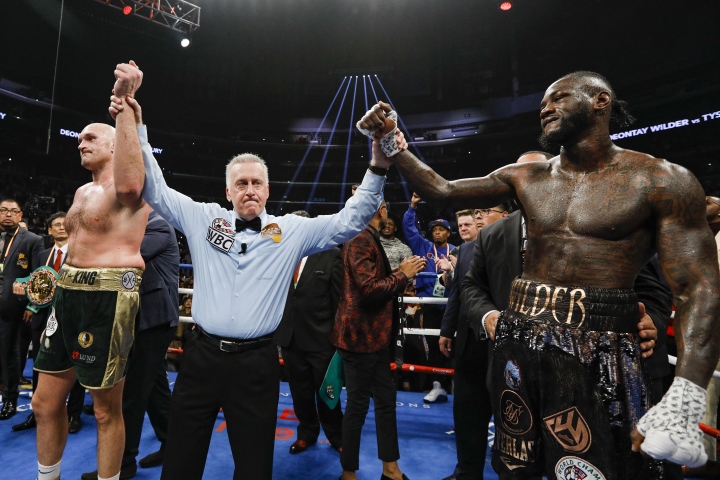 Fury returns to the ring on Sept. 14, when he will take on Otto Wallin, an unbeaten but unheralded southpaw from Sweden. Wilder (41-0-1, 40KOs) is the process of finalizing terms for a rematch with Miami-based Cuban southpaw, with a working—but not yet confirmed or announced—date of Nov. 23 in Las Vegas in place.

Both will be fighting for the second time since their still-discussed 12-round clash last December, where Wilder was outboxed for much of the night but twice dropped Fury late including a dramatic 12th round knockdown. Fury somehow beat the count and regained momentum by fight’s end, only to have to settle for a disputed draw verdict in their Showtime Pay-Per-View headliner at Staples Center in Los Angeles, Calif.

The rematch taking place in Las Vegas doesn’t exactly fill industry insiders with confidence of the judges doing any better should it once again go to the scorecards.

The alleged fight capital of the world carries a sordid history of head-scratching decisions, particularly the first of two fights between Saul ‘Canelo’ Alvarez and Gennadiy Golovkin, with their Sept. 2017 clash ending in a draw that most felt Golovkin deserved to win. Their rematch last September saw Alvarez take a majority decision in a less controversial but still disputed outcome.

Ever the reborn optimist, Fury doesn’t seem concerned with the threat of history repeating itself should another Wilder fight land in the hands of the judges.

“I won 8, 9… even 10 rounds on some people’s scorecards,” Fury noted Saturday evening while on hand at Banc of California Stadium in Los Angeles for a live ESPN boxing telecast. “But I believe I can win a decision anywhere in the world. I think (the judges will) do the right thing this time when we fight.”

They won't do the right thing, they're already bought off. Fury has to avoid getting knocked down to win. He literally has to school Wilder from 1-12 to get the decision. He has to make it look ridiculous to award…

[QUOTE=kafkod;20000750]Not according to the rules of boxing you don't.[/QUOTE] [COLOR="Navy"][FONT="Comic Sans MS"]He took it from him anyway. He basically won the last round even with the knock down. Wilder got beat from pillar to post. The rematch will be a…

[QUOTE=Iamsmoke89;20004341]😂😂comon now don’t do that[/QUOTE] They need to understand that even the rounds Fury was knocked down he won so those were even rounds. Fury won by 3 or 4 points