Fury: When Bullies Like Wilder Get Bullied, They Fold Every Single Time!

Wilder suspects Fury fully understands that inviting a firefight is entirely too risky against one of the most punishing punches the sport has ever seen. Fury promised yet again during a press conference Wednesday, though, that he’ll go after the hard-hitting Wilder when they square off again Saturday night at MGM Grand Garden Arena.

Fury feels more confident entering their rematch because he is in better condition than when he fought Wilder to a controversial split draw in December 2018 at Staples Center in Los Angeles. The lineal heavyweight champion predicted he’ll pressure Wilder (42-0-1, 41 KOs), which he contends will limit Wilder’s opportunities to get full extension on his vaunted hand. 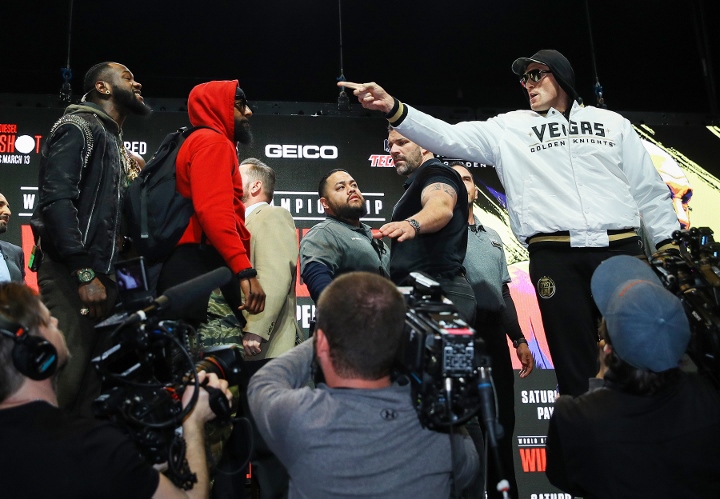 “He’s an untough fighter, he’s a bully fighter,” Fury told ESPN’s Joe Tessitore, the moderator of the press conference. “And when a bully gets bullied, he folds every single time.”

Tessitore questioned why Fury wouldn’t simply attempt to out-box Wilder again, the way he did during much of their first fight. Fury acknowledged the obvious risk involved with altering a safer strategy that mostly worked well.

“It’s a bold move – that’s for sure,” Fury said. “But we fight fire with fire. And the confidence I take into this fight is what enables me to take confidence from going forward, at him, is I’ve never lost a dogfight – ever. Even when I’ve got off the floor, even in round 12, when I went at him, aggressive, it was all over, the show. He couldn’t contain me. So, if I do that from round 1, he’s gonna be gassing by round 5 and hanging on for dear life, if he even gets that far.”

“I don’t buy nothing he says,” Wilder said. “The only thing that I believe [that] Tyson Fury, that he said, is that you’ve gotta nail him to his coffin. And like I said, I brought six-inch nails and a big hammer from Alabama. You know what I’m saying? That’s the only thing I believe that comes out of this man’s mouth because, of course, he gotta hype, he gotta promote and hype up the fight. So, with that being said, a lot of these fighters, they like to tell a lot of lies. They like to, you know, say things that’s not true to make themselves look better and whatever. I understand. I get that.

“But when it’s time for that bell [to] ring and say ding, you know, everything else goes out the window. I ain’t worrying about these fighters. I’m special. And that’s what differentiates me from the rest – my power, my heart, my willingness to go at these guys, my lion’s heart. They know what they in for when they fight me. That’s why they change up trainers. That’s why they do more than what they supposed to do. And now he dippin’ his hand in damn gas.”

How the hell can Fury bully Wilder when Bayless is ref???? Fury has to dance like he has never before and pray the US judges are friends of Arum.

[QUOTE=Monty Fisto;20402518]The biggest lie from either of these two was when Wilder claimed after his first fight with Ortiz that he was never hurt. That was a crock of ****. He was moments from being knocked out, seemed dead on…

The biggest lie from either of these two was when Wilder claimed after his first fight with Ortiz that he was never hurt. That was a crock of ****. He was moments from being knocked out, seemed dead on his…

the undercard isn't great, i hope this fight delivers