THERE CANNOT BE much dispute now over the fact that Tyson Fury must be one of the most recognisable sporting figures on the planet.

Since adding ESPN to his television portfolio alongside BT Sport, Tyson has wowed, charmed and thrilled American audiences by pretty much just being himself and enjoying life to the full.

His latest escapade, launching himself into the WWE with a match against ‘The Monster Among Men’ Braun Strowman, represents another chapter in Tyson’s staggering re-emergence from the dark place he found himself in a couple of short years ago. 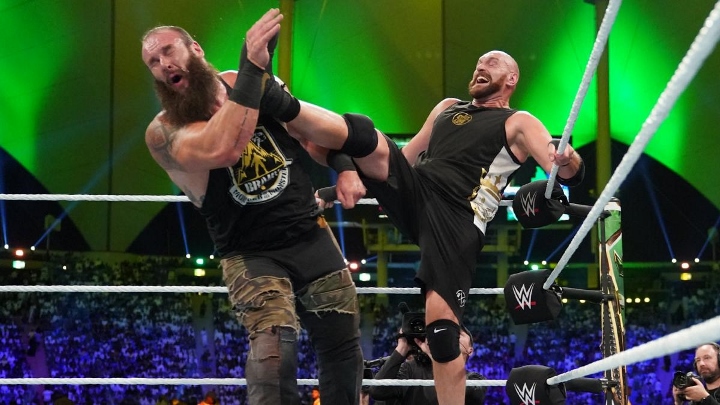 With everything that goes into piecing major heavyweight showdowns together in this day and age there is always going to be significant chunks of time between fights. The Tyson we are seeing now is not sitting about binging and piling on the pounds during his downtime, he is putting himself out there and breaking new frontiers.

That is what Tyson is – along with being an elite-level heavyweight and the best in the business – and there is even talk of him performing a duet with Robbie Williams to bring us all some festive cheer.

Tyson is now a man in demand and the reason for this is because he is a personality. One that people can relate and warm to. It is just a shame that he had to suffer those wasted years when the negativity aimed in his direction ultimately ended up getting the better of him.

Now he has found his true self again and the real Tyson is coming out.

There is another major beneficiary in all this. Everything Tyson does is making fortunes for Deontay Wilder.

The best thing that happened to Deontay Wilder is Tyson Fury, that is for sure.

Deontay tries hard to make himself a household name in his homeland, but it is Tyson who will sell this fight to the masses and he is the game changer.

Our man, mercifully, came through his rough and tumble unscathed and will be ready for his February date with destiny.

Over to you Deontay. Do your thing against Luis Ortiz on November 23 and then we will get the fight we have all been waiting for.

Tyson fury somehow managed to slay that monster braun strowman! He pulled off the upset. Now all wilder has to do is get through Ortiz and we can find out who the best in the world is!

[QUOTE=filup79;20176984]Will Fury actually rematch Wilder? He already ran from the immediate rematch to fight 2 bums and pretend to be a wrestler. This is the same guy who ran away from the Wlad rematch and used depression and drugs and…

LOOOOOL Fury is more ready for Samuel Peter more like, guarantee he fights some of that calibre next.

Will Fury actually rematch Wilder? He already ran from the immediate rematch to fight 2 bums and pretend to be a wrestler. This is the same guy who ran away from the Wlad rematch and used depression and drugs and…

A match made in heaven: FW and TF. Hog heaven. Dinner of [B]wild boar.[/B] They deserve each other.