It was announced on Monday that Billy Joe Saunders will fight Shefat Isufi for the WBO Interim super middleweight world title on Saturday May 18 at The Lamex Stadium, home of Stevenage Football Club, live on BT Sport.

For Saunders, 27-0, the big night in the centre of pitch at Stevenage will represent a first professional fight on home turf in Hertfordshire, with the 29-year-old southpaw stylist hailing from nearby Hatfield.

The former Southern Area, Commonwealth, British, WBO International and European champion was an undefeated WBO world champion at middleweight, having won the belt in December 2015 with a points victory over former champion Andy Lee. 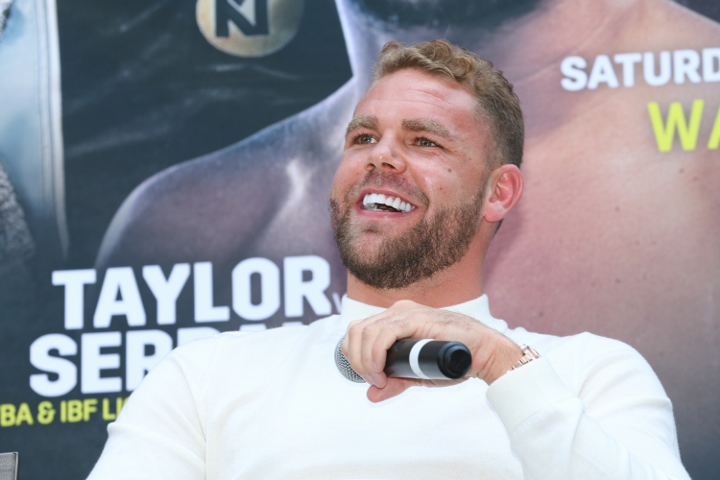 Successful defences followed against Artur Akavov, Willie Monroe jr and, most notably, a career-best performance against David Lemieux on away soil in Canada.

He was set to make a further defence last October against mandatory challenger Demetrius Andrade, but eventually opted to relinquish his title after the Massachusetts commission refused to licence him to fight in Boston after an adverse finding in a VADA test.

He will now break new territory by moving up to 168lbs and seeking to reign at a second weight class.

According to Saunders' promoter, Frank Warren, he tired to make a rematch with Chris Eubank Jr., who holds the IBO's version of the 168-pound title. Saunders won a close twelve round decision over Eubank Jr. when they were unbeaten prospects at middleweight several years ago.

"We tried to make the Chris Eubank Jr rematch and they didn’t want to know, they don’t want Eubank to fight Billy Joe Saunders under any circumstances," Warren said.

"The champion Gilberto Ramirez called the WBO and said he would vacate and they put the fight out to Billy and Isufu and we agreed terms, but Ramirez then said he hadn’t decided so this is now interim title. I believe Ramirez could vacate and the winner will be declared full champion.

"Billy has been very avoided. We signed twice to fight Golovkin and Canelo doesn’t want to fight him.”

Didn't Matchroom make a play to sign up BJS recently? If he'd have made the switch he'd have been right in the mix for Canelo, GGG, Jacobs and Andrade. Fair play he's stayed loyal to Warren, but you can't ignore…

So the new story coming out of team bs,is that hes being ducked,& thats the only reason he has wasted his career vs nobodies & blowing up to 200 lbs between fights & had to rob akavov?(akavov & isufi are…

Sniffy Joe Saunders is a clown?

Reality is they should be embarrased because BJS is a better fighter than Eubank, holds a win over him, yet his career is in a worse position and BJS needs Eubank more than the other way around. Not sure if…