Frank Sanchez fought on one of the last cards of the boxing calendar March 7 before coronavirus broke out, beating contender Joey Dawejko in a ten-round unanimous decision.

The 27-year old Sanchez (15-0, 11 KOs) is ready to graduate from Cuban contender into a heavyweight world beater by taking a bite out of some of the biggest names in the division.

Sanchez is ranked No. 10 by the WBO, and he has his eyes on the sanctioning body’s current champion.

“I’m ready to beat Anthony Joshua one thousand percent — right now. I’ve seen the way he fights and I know of my capabilities,” Sanchez told BoxingScene.com in an interview. “I have the base and amateur background, and that’s helpful. Being with trainer Eddy Reynoso and using new techniques that are used in the pro ranks — it’s really helped and added to my professional career. 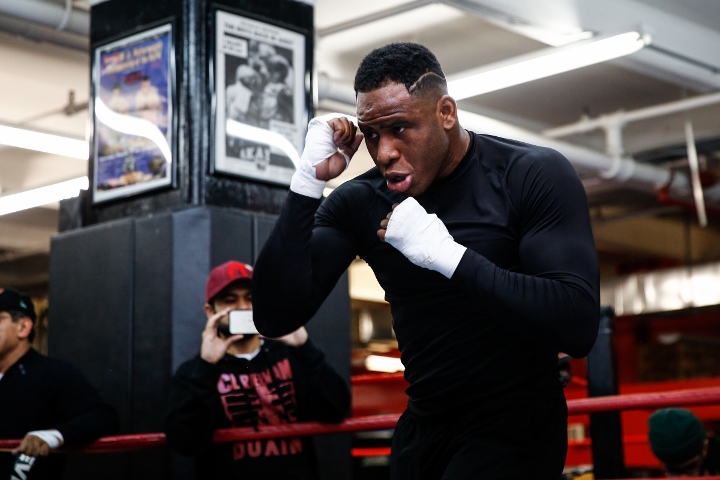 Sanchez has over 200 wins as an amateur. In 2016, he became the Cuban national champion, twice beating touted prospect Erislandy Savon along the way, even dropping him once. Savon and Joshua had also previously been pitted against each other, and most observers believe Savon beat Joshua in the 2012 Olympics even though Joshua was credited with the win.

“Because of my style, and that I beat a guy that beat him, I feel confident that I can beat Joshua,” said Sanchez, who also listed the likes of Andy Ruiz, Oleksandr Usyk, Efe Ajagba and former sparring partner Luis Ortiz as desirable opponents once the boxing calendar resumes back to normal.

Sanchez was supposed to represent Cuba in the 2016 Rio Olympics, but that slot went to Savon. Soon thereafter, like many other Cuban athletes before him, he boarded a hover boat with his brother Martinez and docked in Mexico before crossing the U.S. border to begin his boxing career.

“If we received a call from any fighter of the highest level to fight Frank, we would undoubtedly put him in there and feel confident that he would beat them,” Guadalupe Valencia, manager and adviser to Sanchez, told BoxingScene.com.

In his fight against Dawejko, Sanchez was making his debut with Reynoso, who he united with in November.

“With Frank’s amateur experience and the newfound component of Eddy Reynoso, Frank has the tools to fight anybody and compete at the highest levels. I have not seen him lose a round ever since he became a professional fighter. He’s one of those guys that doesn’t need a lot of professional fights to [become world champion].”

[QUOTE=garfios;20634630]I agreed, he looks older like any other Cuban that grew up in the Island. The sun burns and no air conditioning. Also you walk everywhere you go. Not enough food. It is a harsh life. Yes the Morell kid…

[QUOTE=MulaKO;20538120]Listen ,I don’t care what the guy looks like but I won’t deny the guy looks a lot older than stated Is Morellos another Cuban or ....[/QUOTE]I agreed, he looks older like any other Cuban that grew up in the…

He is not ready for the top guys yet.

A Cuban national champion with Team Canelo behind him now? He should be very dangerous.