DALLAS – Francisco Santana smiled as the words came out of his mouth Thursday. (photo by Ryan Hafey)

The veteran welterweight from Southern California realized he had applied plenty of pressure on himself and Josesito Lopez with his prediction. Santana is just that confident, though, that they’ll produce a memorable battle on the Errol Spence Jr.-Danny Garcia undercard Saturday night.

“I’m very excited to be a part of this show,” Santana said during a press conference at The Renaissance Dallas hotel. “Everybody that’s gonna be tuning in that night, I suggest you guys tune in because you guys heard of the Arturo Gatti-Micky Ward fights, right? Well, expect nothing less, because this is what I say [will be] the West Coast Arturo Gatti-Micky Ward, you know? Josesito is an all-action fighter, like myself, so I think you guys are in for a good treat that night.” 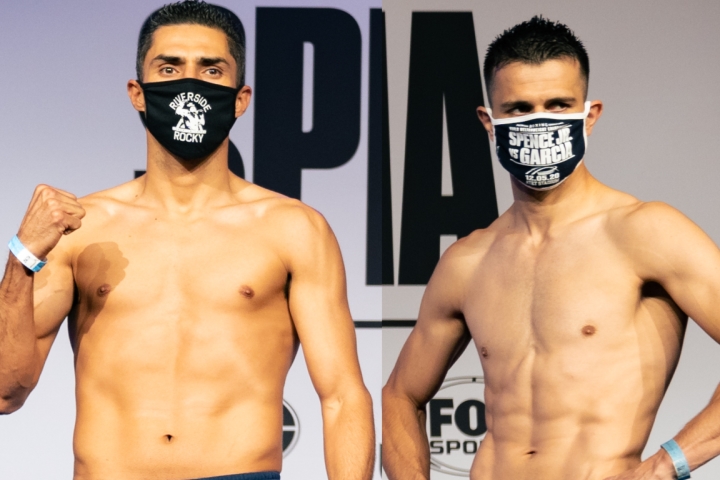 The late Gatti and Ward produced three unforgettable, fan-friendly slugfests in 2002 and 2003.

Those courageous junior welterweights developed such respect for each other through those brutal brawls that they became close friends following their third fight in June 2003. Ward even trained Gatti for his final fight – a seventh-round, technical-knockout loss to Alfonso Gomez in July 2007.

The 34-year-old Santana suspects that he and the 36-year-old Lopez can make similar magic when they square off in a 10-round, 147-pound bout at the Dallas Cowboys’ AT&T Stadium in Arlington, Texas.

“Josesito’s style and my style, it’s almost like a reflection of ourselves in the mirror,” Santana said. “We both faced some top opposition, some really high-level, A fighters, and for some reason we’ve always fallen short, just by a slight hair. But we always put up a great fight. We don’t give up. We just keep coming forward.”

“I’m expecting a really tough fight,” Lopez said. “You know, when I’m not fighting the best, I’m fighting some of the toughest, you know, and vice versa. So, I’m definitely prepared and ready for whatever comes on the 5th [of December], and executing my game plan.”

“I predict a great fight,” Lopez said. “I’ve done everything to prepare to win. I’ve done all the work. Now it’s time to execute, but it could easily be the fight of the night. So, make sure you tune in and don’t miss this one.”

Lopez, of Riverside, California, and Santana, of Santa Barbara, California, will meet in the second of three FOX Sports Pay-Per-View undercard bouts before Spence and Garcia meet in the 12-round main event ($74.99; 9 p.m. EST; 6 p.m. PST).

This is the fight I'm most looking forward to, think it will be a fun slugfest