FOX's Viewership For Kownacki-Helenius Peaked At 1,681,000

The viewership for FOX’s broadcast of Adam Kownacki’s first defeat was almost as high as the network’s audience for Kownacki’s fan-friendly slugfest with Chris Arreola.

Figures released Wednesday by Nielsen Media Research showed viewership for Kownacki’s fourth-round, technical-knockout defeat to Robert Helenius on Saturday night peaked at 1,681,000. The average audience for their short heavyweight bout, the main event of a tripleheader, was 1,675,000.

Helenius knocked down the heavily favored Kownacki with a right-left combination 30 seconds into the fourth round at Barclays Center in Brooklyn, the Polish-born Kownacki’s home borough. Kownacki got back to his feet by the time referee David Fields’ count reached four, but Helenius unloaded more than 30 punches on a mostly defenseless Kownacki, who was stopped while still standing at 1:08 of the fourth round. 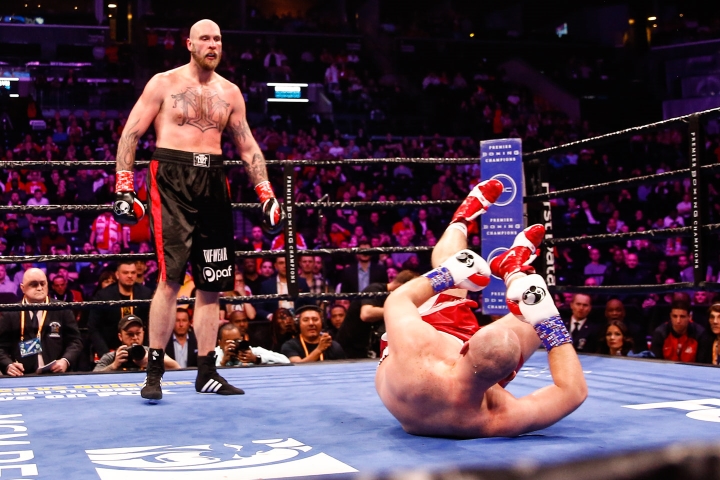 His surprising loss knocked Kownacki off his path toward a title shot. The 30-year-old Kownacki (20-1, 15 KOs) hopes Helenius (30-3, 19 KOs) gives him an immediate rematch, but the 36-year-old Finnish fighter isn’t contractually obligated to do so.

Kowancki’s previous performance on FOX – a 12-round, unanimous-decision victory over Arreola on August 3 at Barclays Center – attracted a peak audience of 1,769,000 and an average audience of 1,727,000.

In the second fight FOX aired, Nigerian heavyweight prospect Efe Ajagba (13-0, 11 KOs) beat Romanian veteran Razvan Cojanu (17-7, 9 KOs) by ninth-round TKO. Ajagba knocked down Cojanu twice – once apiece in the eighth and ninth rounds – before referee Ron Lipton halted the action at 2:46 of the ninth round.

[QUOTE=Boxing Goat;20459477]I would rather watch BJS v Canelo or Usyk v Chosora over anything PureBumChampionships has ever had on and so would almost any other boxing fan. You're delusional from hate. Must be a PBC employee, promoter or Floyd ball…

[QUOTE=Boxing Goat;20459434]PBC has almost all trash fights and just happens to reach a lot of homes. And stop acting like their ratings ate always this good[/QUOTE] UMMM YOU CAN GOOGLE PBC ON FOX 2019 AVERAGE LOL... EVERY EVENT DID 1.5…

[QUOTE=HaymonsWorld;20457853]pbc is doing the best ratings in boxing lmfao most fans in america think pbc is the best... Ratings show dazn and espn are garbage....[/QUOTE] PBC has almost all trash fights and just happens to reach a lot of homes.…

Lmao you all sound like a bunch of pendejos arguing over numbers once again who gives a flying **** its boxing dumbasses if its getting views its good for the sport regardless of what platform. You all are a bunch…