Fornling vs Boesel Now For Vacant WBA Interim Title at 175

The WBA have approved Sven Fornling (15-1-) vs Dominic Boesel (29-1), on November 16 in Halle an der Saale, for the now vacant interim light heavyweight world title. Boesel is ranked # 1 by the WBA while Fornling is # 3.  This SES promotion is billed as "Das WM Projekt" and there´s now two titles at stake.

Meanwhile Jean Pascal has been upgraded to WBA "regular" champion while Dmitry Bivol is "super" champion in the weight class.

Earlier this week the IBO, where Fornling is champion, gave the green light for the fight while the EBU refuse to sanction it but Boesel still holds the title.

Should Fornling beat Boesel and Badou Jack takes care of Jean Pascal on December 28 - we might have an all Swedish super-fight coming in 2020. 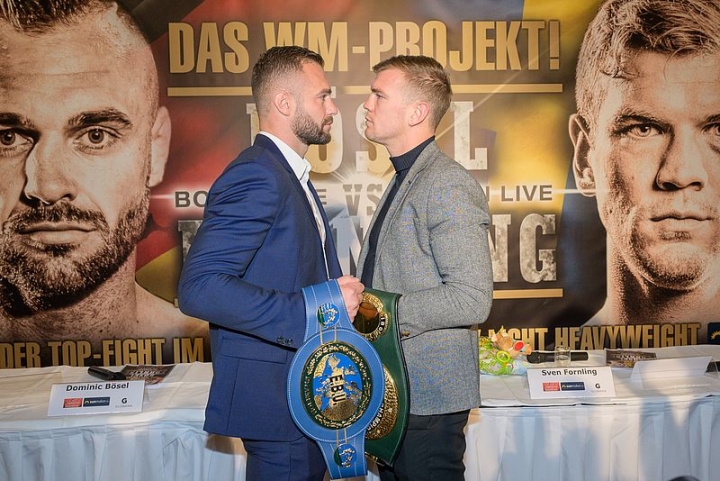 IN OTHER NEWS: World-Ranked welterweight Mykal Fox will compete in the 10-round main event on Friday night,  December 6th at The 2300 Arena  in Philadelphia.

The 10-bout card will be promoted by King's Promotions.

Fox of Forestville. Maryland is ranked number-15 by the WBA, has a record of 21-1 with five knockouts.

The 24 year-old Fox is a five year professional and has garnered his world ranking on the strength of wins over Ricardo Garcia (14-1), Gonzalo Carlos Dallera (5-0), 2016 Olympic Gold Medal Winner Fazliddin Gainazarov (7-0) and in his last bout, Fox won a 10-round unanimous decision over Eudy Bernardo (25-4) on September 14th in Bethlehem, PA.

Fox's opponent will be named shortly.

Henderson of Fayetville, Arkansas has a record of 12-0 with eight knockouts.

The 29 year-old is a three year professional, and has had a meteoric climb up the super middleweight latter.

Henderson has wins over Bobby Taylor (4-0) and Brandon Robinson in a bout that was voted Philadelphia Fight of the Year for 2018.  In his last bout, Henderson stopped Antowyan Aikens on May 10th at the 2300 Arena.

Pllana of Hagerstown, Maryland has a record of 7-1 with four knockouts.

The 25 year-old is a two-year professional who has defeated Jason Bell (3-0) and in his last bout, Pllana stopped Alex Lara in one-round on October 24th in Washington, DC.

A packed undercard has been assembled as some very talented fighters will be on display.

In six-round bouts, Joshafat Ortiz (7-0, 4 KOs) of Reading, PA will take on an opponent to be named in a lightweight bout.

Anthony Mercado (13-4, 11 KOs) of Arecibo, PR takes on an opponent to be named in a junior welterweight bout.

Damon Allen (16-1-1, 5 KOs) of Philadelphia fights an opponent to be named in a junior welterweight fight.

Brandon Mullins (6-0, 2 KOs) will box an opponent to be named in a middleweight fight.

Bivol-Jack would be ok, but what is better for Bivol is to chase that WBO belt, there are Eleider Alvarez, Saul Alvarez and Gilberto Ramirez, he should fight one of them latin guys

Yes let the swedes fight each other or Pascal at best. I don't wanna see Bivol waste time on this dude lol