Foreman Ranks Wilder-Fury in Top Three Rematches of All Time

George Foreman has been a part of some of the most iconic boxing matches of all time. But rematches? Not so much.

Foreman, a two-time heavyweight champion and Olympic gold medalist, does know a classic battle when he sees it, and he called Deontay Wilder’s rematch with Tyson Fury next Saturday for the WBC title one of the three most anticipated heavyweight rematches ever, behind Max Schmeling vs. Joe Louis II in 1938 and Muhammad Ali vs. Joe Frazier II in 1974. (Based on rematches of a first fight.)

“There were three important rematches in boxing history,” Foreman told BoxingScene in a phone interview on Thursday of the heavyweight division. “The most important was Max Schmeling and Joe Louis when the whole world was watching. That was the most important rematch of all time. Louis won but the expectation was that he was going to lose again, which made the rematch so interesting. Then Ali-Frazier. I thought nobody could beat Muhammad Ali and then in the first fight Joe Frazier hits Ali with a left hook (in the 15thround) and Ali’s legs went up in the air and when they announced the rematch everyone was on their toes because Frazier had beaten him the first time and Ali was on the comeback trail and it was one of those rematches you knew anybody could win.”

Which is why Foreman, 71, holds Wilder-Fury II up with those two classics - because of the evenness of the matchup and the potential for anything to happen. It’s a big statement for sure — there have been many unforgettable rematches in the division. Riddick Bowe’s second fight in 1993 with Evander Holyfield after Bowe decisioned him the first time was a classic. If you go back further, Ingemar Johansson’s rematch with Floyd Patterson in 1960 after Patterson was floored seven times in the third round of their first fight, setting the stage for Patterson to try to regain his title, which he did, was also momentous.

Gene Tunney-Jack Dempsey II, the “Long Count Fight” in 1927 was legendary. Then there’s Ali’s controversial first-round knockout of Sonny Liston in their 1965 rematch in Lewiston, Maine, in which Ali’s “phantom punch,” a right to Liston’s jaw would become one of the most talked about punches ever.

There are many others — Mike Tyson’s 1997 rematch with Holyfield deserves mention, as does Lennox Lewis’ second fight with Hasim Rahman. More recently there’s Anthony Joshua’s rematch with Andy Ruiz Jr. last December in which he regained his titles and the list goes on and on.

Foreman wouldn’t put his own rematch against Joe Frazier in 1976 in the category of must-see bouts, partly because nobody was really clamoring for a second fight after Foreman beat him decisively the first time. 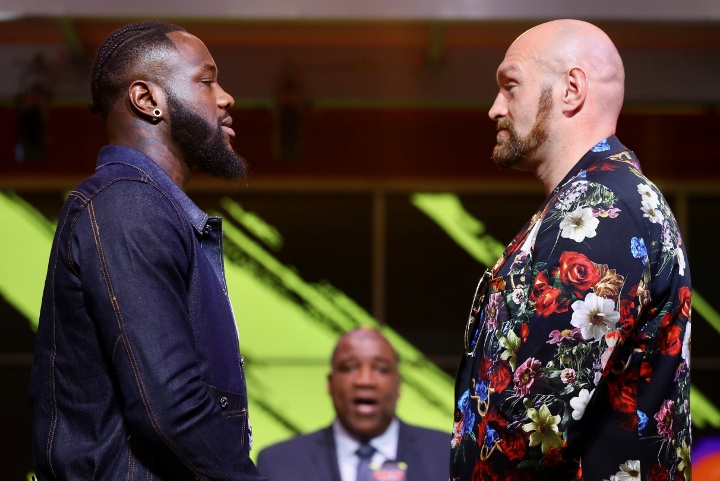 Foreman knocked the undefeated Frazier down six times in 1973 before the fight was stopped in the second round to win the heavyweight championship. Three years later, Foreman stopped Frazier again in the fifth, hoping it would lead to a second fight with Ali but the rematch never came.

“When we fought the second time, there wasn’t much suspense,” Foreman said. “That’s what’s needed in a rematch — suspense and drama. Joe Louis coming back in the rematch with Schmeling was high drama.”

That is true — Louis destroying Schmeling in one round in 1938 is considered the biggest heavyweight rematch of all time (and possibly the most important fight of all time) because of the historical implications involved. Schmeling was a symbol of Nazi Germany while Louis represented Democracy and righteousness.

But Foreman wasn’t ranking the rematches for content but in terms of how eager fans are for the second fight, and he views Wilder-Fury as a 50-50 matchup after the first ended in a controversial split draw when Fury rose from two knockdowns and used his superior boxing ability to control most of the action.

“Wilder had that fight won and we thought he had it won,” Foreman said of the knockdown in the 12thround in which Fury somehow got up from a vicious right-left combination.

“That’s what makes it one of the most important heavyweight rematches in boxing history — because you don’t know who’s going to win. If Tyson does what he did in the first fight — boxing him and not playing around — I think he could easily win a decision. If Wilder decides to come back and can land that right-left hook again, then he can get this guy out in seven or eight rounds. I really don’t know what’s going to happen. I wouldn’t bet on the fight, I’ll tell you that.”

If he had to choose a winner, then he slightly favors Fury because of his unique size and skill-set. Foreman doesn’t have a personal relationship with either guy. The only current top heavyweight he said he’s ever met is Andy Ruiz Jr.

Foreman got some attention last November for telling TMZ that he didn’t consider Wilder a knockout artist in the same class as Louis, Mike Tyson or Frazier. Foreman sought to clarify those remarks on Thursday, telling BoxingScene that it’s fine for pundits to call Wilder the greatest puncher of all time, since that’s what observers have been doing with fighters in their respective generations forever.

[QUOTE=The Old LefHook;20391446]Foreman has always been known for some of the dumbest comments of all time.[/QUOTE] I agree. I mean I like the guy, but he’s all over the place. Nobody is looking to George for actual stylistic boxing advice.…

[QUOTE=OldTerry;20391942]Good question. If a rematch had taken place and the location a much cooler one then I would pick Foreman. Foreman is an intelligent man and would not fall for the same Ali tactics twice.[/QUOTE] Would have to agree

[QUOTE=NoConcoms;20391978]See, you guys say this, yet, IMO Fury gives Wilder WAY MORE problemsb than AJ ever could. And he's fighting Fury........again.[/QUOTE] Fury would probably beat AJ, I think Wilder is more of a challenge to Fury. It isn't as simple…

What is Foreman smoking?

The great thing about the great fights is you can make a great case for them both winning . A rematch of two unbeaten fighters is a one off......What's good enough for George is good enough for me....can't wait!!!