Eubank: I'll Do What Charlo Couldn't Do, Stop Korobov!

When the Russian southpaw concluded his remarks during a press conference by stating, “I hope it’s a good decision,” Korobov obviously referred to his unanimous-decision defeat to Jermall Charlo last December 22 at Barclays Center in Brooklyn. Charlo sat barely a few feet away from Korobov, who gave Charlo one of the toughest fights of his career, despite that one judge absurdly scored 11 of those 12 rounds for Charlo.

Chris Eubank Jr. promised moments later that Korobov won’t have to worry about judging when they meet in their own 12-round middleweight title fight Saturday night on the Charlo-Dennis Hogan undercard at Barclays Center.

“Matt’s talking about the right decision,” Eubank said. “It will be the right decision. He will be stopped before the 12th bell, and I will go on to fight for the titles. I’m out here to take over the middleweight division, and anyone with a belt, I’m coming. WBC, WBA, IBF, WBO – I want all the big names. I’m 30 years old now. I’ve got three or four years left in me of prime fight time. So, I’m coming for all the belts right now. Matt Korobov is a great introductory fight for me to the U.S. And after that, it’s open season. So, I’m coming.” 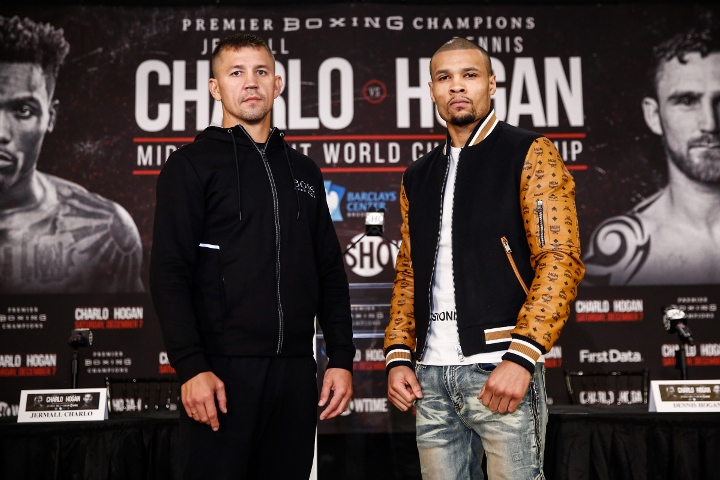 England’s Eubank (28-2, 21 KOs) will fight at the middleweight limit of 160 pounds for the first time in 3½ years. His past six bouts have been contested at the super middleweight maximum of 168 pounds.

Andy Lee stopped Korobov in the sixth round of their scheduled 12-rounder for the vacant WBO middleweight title in December 2014. Korobov was comfortably in front of Lee on two scorecards through five rounds that night, but Lee landed a counter right hook that hurt Korobov badly and eventually prompted referee Kenny Bayless to stop their bout.

Korobov’s only other loss came against Charlo. He took that difficult fight on less than one week’s notice, once Charlo’s original opponent, Willie Monroe Jr., failed a performance-enhancing drug test.

“He’s tough,” Eubank told BoxingScene.com about Korobov. “He’s smart. He’s experienced. He’s a veteran. So, I’m not overlooking him. He might think that, but I’m not. I know he’s got a lot of tricks up his sleeve, and he’s a southpaw. That amplifies all of that. I’ve trained diligently for this man, a lot of southpaw sparring, studied him, and I’m gonna dispatch of him in a spectacular fashion. That is my main intention. My main goal is to go out there and stop this man, make a statement, do what Charlo couldn’t do and steal the show.”

The 30-year-old Eubank will make his U.S. debut in the second of three bouts Showtime will televise Saturday night (9 p.m. ET/6 p.m. PT).

In his most recent action, Eubank beat former IBF super middleweight champ James DeGale convincingly in a domestic showdown February 23 at O2 Arena in London. Eubank decided following that 12-round points win to move back down to 160 pounds, so that he wouldn’t operate at such a weight disadvantage once he enters the ring.

“As far as Korobov goes, it is a great fight,” said Eubank, who’ll box Korobov for the WBA interim middleweight title. “We’ve both got the same record. I respect him. He’s done a lot in the sport. But this is my time. I’ve worked too hard. I’ve done too much. I’ve been through too much to come out here and not go through this guy, man. Like I said, it’s been a dream of mine for a long time to come out here and perform. I’ve had a lot of big fights, a lot of big wins in the UK. And now I feel like it’s time to come out here and introduce myself to the American public. So Korobov, unfortunately for him, he is the one that has to bear the brunt of that.”

Hey Eubank just get a legitimate win over Korobov and you have achieved more than Charlo did. PBC had to rob Korobov in the Charlo fight.

[QUOTE=Weebler I;20232367]Korobov is skilled, he outboxed Charlo who is a good boxer himself. Eubank is not that good a boxer, youth may beat experience.[/QUOTE] Eubanks is athletic, he has heart and I think he's faster then Charlo or Korobov. Eubanks…

[QUOTE=AdonisCreed;20232343]Dude you just need to win don't even worry about going for the KO. If the knockout comes take advantage of it other than that just focus on executing the gameplan. P.S. Don't get sparked kid lol[/QUOTE] Eubanks chin looks…