The ratings for Oscar Valdez’s fight Saturday night were significantly higher than for his previous ESPN appearance.

The card headlined by Valdez’s victory over Scott Quigg drew an average of 1.1 million viewers, according to ratings released Tuesday by Nielsen Media Research. Valdez’s previous fight on ESPN, a unanimous-decision defeat of Genesis Servania on September 22, helped draw an average audience of 706,000.

England’s Quigg (34-2-2, 25 KOs) was considered a greater threat to the WBO featherweight champion than the Philippines’ Servania (30-1, 13 KOs), who dropped Valdez (24-0, 19 KOs) during the fourth round. Quigg connected with a right hand in the fifth round that fractured Valdez’s jaw, but the determined Mexican champion fought through the pain and won a 12-round unanimous decision Saturday night in Carson, California. 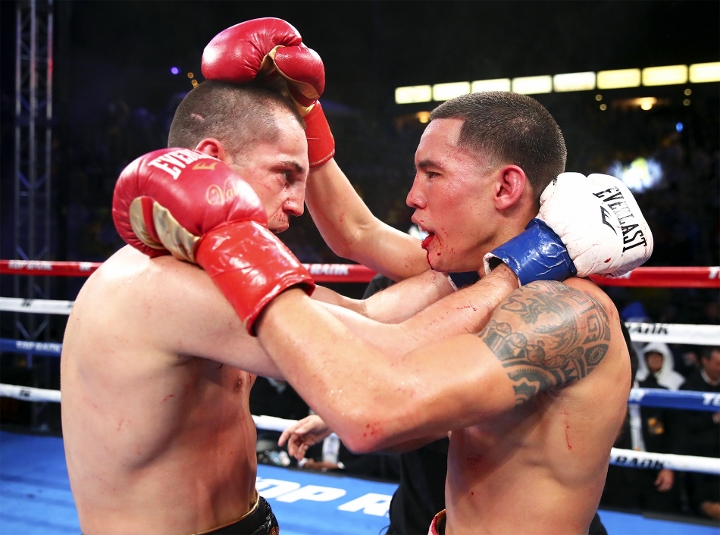 A rare rainstorm in Southern California kept thousands of fans from attending the Valdez-Quigg card, which took place outdoors at StubHub Center. But the ratings represented a significant increase from the first two cards ESPN televised this year as part of its partnership with Bob Arum’s Top Rank Inc.

The ratings for the Valdez-Quigg telecast might’ve been even higher had the main event not mostly aired at the same time as Showtime’s main event, Mikey Garcia-Sergey Lipinets.

The Garcia-Lipinets fight was watched by a peak audience of 689,000 and an average audience of 618,000. Garcia (39-0, 30 KOs), of Oxnard, California, beat Kazakhstan’s Lipinets (13-1, 10 KOs) by unanimous decision to win the IBF junior welterweight title and became a world champion in a fourth weight class.

ESPN, a basic cable channel, is available in approximately 88 million homes in the United States. Showtime, a premium cable channel, has roughly 24 million subscribers in the U.S.

Are they saying Lomachenko-Linares did better than this?

Well these numbers are hard to believe. All that talk about showtime,putting the nails in the coffin of espn,and,hbo and the numbers just dont add up haha

Say what u will, the Bob father is the best promoter in the world.

[QUOTE=Squ□redCircle34;18570858]Valdez is a star incoming but needs to take the rest of the Year off, he's taken lots of punishment in his last 4 fights! He throws with nasty intentions, good combos, punch selections, heavy handed and more heart than…