It didn’t rain Thursday in Manhattan, but that didn’t stop an undisclosed ESPN executive from canceling car washes the network had scheduled for Anthony Joshua and Jarrell Miller.

They were to later appear Thursday on Stephen A. Smith’s daily radio show and Max Kellerman’s new “Max on Boxing” show, which airs each Friday afternoon.

When boxers and other athletes are ushered through various ESPN shows on the same day, it is referred to within the television industry as the equivalent of a “car wash.” 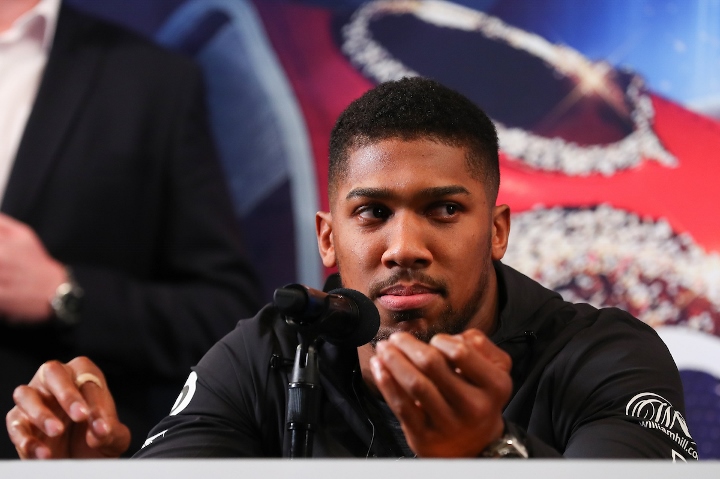 Joshua’s trip to the United States this week was specifically extended to Friday to accommodate ESPN’s requests to interview him and Brooklyn’s Miller at their studios at South Street Seaport in New York. Kellerman, one of the network’s foremost boxing experts, spoke glowingly about Joshua and mentioned his scheduled appearance Thursday during “First Take” on Wednesday.

“We were informed Wednesday evening that AJ’s three-hour schedule at ESPN on Thursday morning had been canceled,” Chris Legentil, DAZN’s vice president of communications and public relations, told BoxingScene.com. “With so many big boxing fans among ESPN’s broadcasters, we were really looking forward to those segments. Hopefully, we can bring the heavyweight champ back to their studios when he returns to the U.S. ahead of his fight this spring.”

John Skipper, executive chairman for DAZN Group, is a former president of ESPN. Skipper resigned unexpectedly from ESPN in December 2017, citing a “substance addiction” of “many years” as his reason for stepping away from that prominent position.

It is unknown, however, if Skipper’s position with the emerging streaming service had anything to do with the cancelation of those appearances for Joshua and Miller.

Regardless, DAZN is considered competition for ESPN, FOX and Showtime, the three American networks most heavily involved in broadcasting boxing.

The 29-year-old Joshua (22-0, 21 KOs), a mainstream superstar in the United Kingdom, will make his U.S. debut by defending his IBF, IBO, WBA and WBO titles against the trash-talking Miller (23-0-1, 20 KOs) on June 1 at New York’s famed Madison Square Garden. Though three months away, it isn’t uncommon for boxers and their handlers to start promoting high-profile fights this far away from the actual event.

The Joshua-Miller rivalry escalated Wednesday during a press conference at The Garden, where both boxers hurled insults and promised a knockout victory. They’ll participate in another press conference Monday in London.

[QUOTE=observer;19532903]Exactly! Whether ESPN will or won't promote DAZN fights is beyond the point. They arranged the interviews and canceled them last minute. Dick move![/QUOTE] That's petty on top of it and show character flaws

Obviously someone at ESPN is starting to see DAZN as a competitor to their own boxing content. What's next? Not covering the results of boxers from rival promoters on SportsCenter?