The slow rolling but steady PBC round robin at welterweight featuring Errol Spence, Danny Garcia, Keith Thurman, Shawn Porter, and now Manny Pacquiao lands on its latest chapter Saturday night (Fox PPV, 9 PM EST). It’s the second unification bout of the bunch. Unlike the fallout from Thurman-Garcia that saw the WBC and WBA titles splintered again due to Thurman’s injuries, we may be a strong step closer to an undisputed king in the division when this weekend is over.

Porter has been a stalwart in the division since winning his first major title in the division from Devon Alexander in 2013. He hasn’t won them all but Porter has been in the ring with Kell Brook, Thurman, and Garcia. The latter two, in defeat and victory respectively for Porter, had a hell of a nights work on their hands. The best Porter is a mauling, energetic, physical fighter who disrupts the rhythm of fighters who appear more technically sound. Coming off a debatable win over Cuba’s Yordenis Ugas featuring a more measured Porter, does the veteran have one more all out assault in his holster?

Spence is the fighter who looks the part of genuine welterweight king more than any of his PBC peers. A blue chip prospect out of the 2012 Olympics, Spence is edging toward potential super stardom. There is an assumption among some that the Texan’s real challenge at 147 lbs. is the one titlist in the division fighting outside the PBC umbrella, Terence Crawford. The assumption ignores his still developing resume.

Spence is good but, as he builds depth into his ring record, assumptions still come with questions. They are questions only answered one fight at a time. What answers will he be asked to provide against Porter? 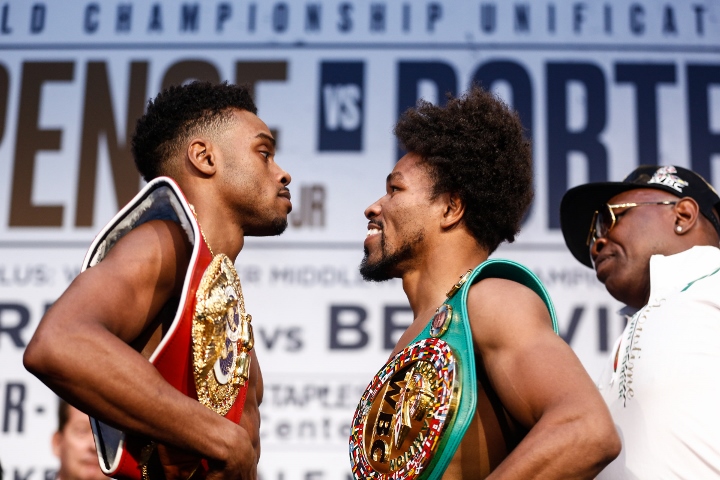 The Case for Spence: Spence has advantages in height (close to three inches) and reach (also close to three inches) over the stout WBC titlist. He’s been a bigger puncher so far in his career and, while Porter’s chin has been an asset, Spence’s power from the southpaw stance could be a big asset; Porter hasn’t faced a southpaw since his win over Alexander and never a southpaw as physically talented as Spence in the paid ranks. Porter’s first career loss to Brook, and near defeat at the hands of Ugas, came in part due to their ability to work Porter from range and Spence is comfortable boxing from the outside. If Porter does get close, Spence is also comfortable in the trenches. Spence is an excellent body puncher who knows how to work in combination. If Spence stays calm when Porter rushes, there will be countering opportunities available for much of the night. Spence has the technical skill, and varied attack, to threaten to dominate the fight.

The Case for Porter: What Porter will we see? It’s a valid question after the escape against Ugas. Porter opted to box more and brawl less that night. It may have been an issue of a questionable game plan. What if it was a bigger tell? Porter’s aggressive best is an exacting approach sometimes tougher to muster with age. Porter probably isn’t long enough, quick enough, or accurate enough to try to outbox Spence. If he has it in him to create havoc, and can sustain, Porter will have a chance to disrupt Spence and make the fight a mess. His best chance is a brawl where Spence is forced to throw, and open up, more giving Porter a chance to land. This is Porter’s first big pay-per-view main event after over a decade as a pro; expect to see him bring everything he’s got. It will make for some hot spots in the battle. If Porter can stay off the deck, he just needs enough of those spots to lean his way in seven rounds. Given all his experience, his chances might be slightly underrated.

The Pick: Even if those chances are underrated, there is a reason Porter is an underdog. Spence might not yet have faced the same variety of challenges as Porter but he’s been in with enough to make his case as the leader of the division. It’s not a clear-cut argument today. A win over Porter won’t clarify his position. Manny Pacquiao and Crawford and are almost universally rated ahead of Porter right now but this is still a clash of consensus top five welterweights. There has been some unfair cynicism about this fight because of what it isn’t. There is so much to like about what it is. Can Porter send shockwaves through the division and put preconceived notions on their ass? He’s given more than enough in the ring to be seen as more than a walkover. The pick here is Spence by late stoppage but Porter will make him work for it and we’ll get a better show than was the case in Spence-Garcia.