Errol Spence Jr. was barely 40 minutes into his recent media workout when he was told that it was nearly time to shut everything down in order to conduct an interview.

It wasn’t what he wanted to hear at the time. He understood the protocol that came with the session, but was more interested in showing viewers rather than telling them that the words on the T-shirt he wore upon arrival—“I’m Back”—wasn’t just a claim but a personal message.

“It’s one of the best I’ve ever felt,” Spence (26-0, 21KOs) said of the training camp ahead of his upcoming unified welterweight title defense versus Philadelphia’s Danny García (36-2, 21KOs).

The upcoming Fox Sports Pay-Per-View showdown with García at AT&T Stadium in Arlington, Texas marks the first fight of any kind—at least in the ring—for Spence since the horrific single car accident which left him seriously injured last October. It’s the first full training camp since that night. It was also the first time the public could view and decide for themselves—even if from afar via livestream—just how far Spence has come along in the 13 months since that low point in his life.

“I’m feeling good and ready to go,” insists the unbeaten southpaw from Desoto, Texas, already sporting a chiseled physique as he attempts the fourth defense of at least one welterweight title. “You see how I’m sweating out, I’m not dried down or look like I’m struggling to make weight. I’m feeling good.”

Every day has to feel good for Spence since somehow escaping the incident in question merely with injuries which left him hospitalized for more than a week.

From the early hours into the Sunday morning following his 12-round win over Shawn Porter to unify two welterweight titles until just before 2:47 a.m. on Thursday, October 10, 2019, Spence had every right to feel like the best man alive. The now 30-year old welterweight was coming off of one of the best wins of his career—at worst, second only to his first title-winning effort in an 11th round knockout of Kell Brook in May 2017—and universally regarded as one of the best boxers in the world.

Then came that moment. Spence was speeding down Riverfront Blvd. in downtown Dallas in the wee hours of the morning, when he suddenly lost control of his white Ferrari. The car jumped the road median and flipped over at least five times before coming to a halt in a completely wrecked state.

Spence—who was not wearing a seatbelt and who had alcohol in his system, though below the 0.15 BAL which ultimately kept him out of prison—was ejected from the vehicle. The star boxer suffered injuries and scars to his face and mouth as he recovered in the Intensive Care Unit (ICU) at Methodist Dallas Medical Center before being released six days later. 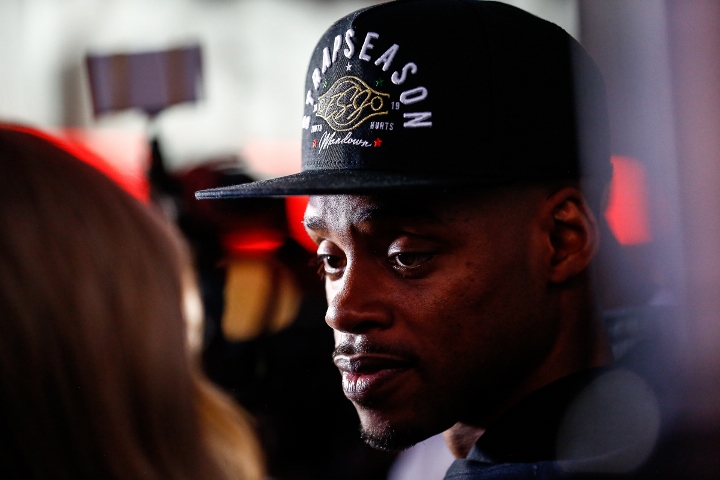 At the time, far more concern focused on his health than if and when he would be able to return to the ring. Even less thought was given to the scheduled showdown with García—at the time budgeted to take place January 25, 2020, but completely dismissed at the time as the greater focus was on Spence returning to normal in everyday life.

That would take a while, despite the repeated insistence that he was fine and as good as new. The work was physically put in, but the fight to be there for his kids—his two daughters and a son, Errol III who entered the world this past October 26—at full capacity is why every day is a new lease on life.

“It’s just a blessing and motivation,” reveals Spence of the arrival of his son just two weeks after the one-year anniversary of the aforementioned crash. “It pushes me to work harder, to see his face along with my two other daughters. I just want to fight for their future, and have the best life and that I give them.

“The only way I can do that is to push hard and work hard to give them that life.”

Spence’s place atop the welterweight division and high among most pound-for-pound lists has positioned him to serve as one of the best paid athletes in the sport today. His fight with García—a former two-division champion who has won two straight since a title-losing 12-round decision to Shawn Porter in September 2018—marks a third straight appearance atop a Fox Sports PPV.

The prior two occasions both came in 2019. Spence helped Fox Sports enter that medium in a 12-round shutout of unbeaten Mikey Garcia, which also took place at AT&T Stadium. Six months later came the win over Porter, which aired live on PPV from Staples Center in Los Angeles. The two events generated more than 600,000 PPV buys along with a combined 65,000 in attendance.

There remains a lot of uncertainty surrounding either potential figure for the December 5 show. The ongoing coronavirus pandemic has limited the amount of people who can attend large gatherings, although event handlers hope to be able to draw 30,000 fans into the state-of-art home of the Dallas Cowboys which can normally hold upwards of 100,000 people.

The event is also the third stateside boxing PPV since the pandemic, with the previous two not providing a clear indication of the average boxing fan’s spending habits in such times. The Charlo twins co-headlined a September 26 Showtime PPV which likely topped out at 120,000 buys. Five weeks later, Gervonta Davis debuted as a PPV main event in a rousing 6th round knockout of Leo Santa Cruz which marked the first PBC post-pandemic event with fans in attendance—roughly 9,000 at San Antonio’s Alamodome—and which drew a reported 225,000 buys.

Box-office success does not rank high on the list of priorities at the moment for Spence. Besides, he has already proven his worth in that medium. What he’s yet to prove since last October, isn’t how many fans in attendance and home viewers he can draw to his next fight but what he will do once he’s there.

In his mind, Spence knows how he can and should perform versus even a still elite-level talent in García. Until he throws that first punch—and perhaps more importantly, takes that first shot from his opponent—the night will remain as much of a mystery as the one that lingered throughout the entire physical rehabilitation process.

“It was a lot of uncertainty,” Spence recalls of the months following the accident. “I didn’t know what I was gonna do. I just knew I was gonna keep training. I went to any city where I could talk to the doctors and get some kind of brain scans and body scans.

“I just wanted to make sure I was 100% ready to be in the ring. They gave me the OK, they said my brain didn’t have any impact so it was time.”

Since then have come the personal milestones. The first day back in the gym earlier this year. The first day of sparring this past September, exactly year to the day of his win over Porter. In less than two weeks, the first time back in a prizefight and his first chance to show why he’s still the best.

Perhaps the most important milestone of them all—that one year reminder on October 10, 2020, which he shared with the world through social media channels of why the fight truly continues.

“A Year today,” Spence stated, along with images of his wrecked car and his first night in ICU. “I don’t know how or why I got saved but thank God. [T]he thought of leaving my lil girls & them growing up without me still f*ck with me but I’m triple blessed & must be here for a reason.”

In being there for his family—and vice-versa—now comes the opportunity to once again provide for them in the best way he's always known.

"I feel like this is a second chance for me, not just in boxing but in living," notes Spence. "I definitely believe it’s a miracle for me to survive, and a year later to have a fight like this.