Erickson Lubin: You Could See How Much I've Changed Since The Charlo Fight

Erickson Lubin considers himself a completely different fighter from the 22-year-old challenger Jermell Charlo knocked out in the first round nearly three years ago.

The strong southpaw is 4-0 since Charlo stopped him with one perfectly placed punch in October 2017 at Barclays Center in Brooklyn. If Lubin can extend his winning streak Saturday night when he encounters Terrell Gausha, he would become the WBC’s mandatory challenger again and secure another crack at that sanctioning organization’s super welterweight title.

The Orlando, Florida, native believes he would be much better equipped for either a second shot at Charlo or a first fight versus Jeison Rosario than Lubin was when he challenged Charlo. The winner of the Charlo-Rosario bout, a 154-pound title unification fight scheduled for September 26, would be obligated to make a mandatory defense of the WBC belt against Lubin.

“You could just go watch the tapes,” Lubin told BoxingScene.com. “You could see how much I’ve changed since the Charlo fight. Since I’ve turned pro, I’ve grown completely. It’s two different fighters in there now. This Erickson Lubin, this ‘Hammer Time,’ is a totally different ‘Hammer Time.’ ” 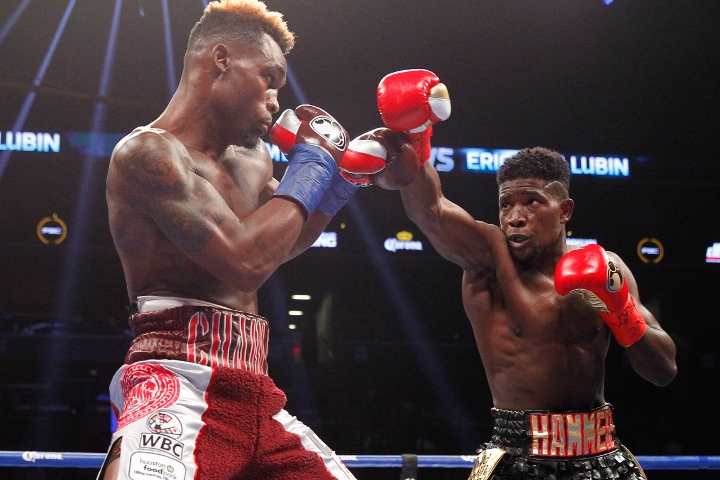 Lubin feels he has improved on “everything,” but making adjustments during fights has become one of his strong suits since he started working with veteran trainer Kevin Cunningham.

“Being able to think in there and adjust,” Lubin said, “I feel like I’ve been able to work on those things while being in the ring. Kevin, especially during sparring, he’s been telling me to do certain things and what he wants me to work on in particular rounds. And, you know, I just listen to him. I go out there, I set my opponents up and I feel like that’s been a key thing for me, just being able to adjust and take over in the ring.”

The 24-year-old contender defeated Nathaniel Gallimore (21-5-1, 17 KOs) by 10-round unanimous decision in his most recent appearance, last October 26 in Reading, Pennsylvania. Gallimore, of Evanston, Illinois, was a late replacement for Gausha, who suffered a hand injury during training camp.

The 12-round, 154-pound WBC elimination match between Lubin and Gausha is the main event of Showtime’s three-bout broadcast from Mohegan Sun Arena in Uncasville, Connecticut.

Since the Charlo fight? I didn't see much there, to compare to what he's doing now..

Lubin's been on a win streak since Charlo but Gallimore, ranked 97 by BoxRec, was probably his toughest opponent. so Gaushua is a step up and a stiff test. The thing about boxing during the pandemic is most guys haven't…

Don’t remind me of that Charlo fight talk all that good shipt after you beat punk ass Charla Sister in a rematch that’s if Rosario don’t beat you to it.