Heavyweight contender Eric Molina has been suspended for two years by UK Anti-Doping for failing a performance-enhancing drug test after his loss to Anthony Joshua.

Sky Sports reported Tuesday on its website that Molina tested positive for dexamethasone, a corticosteroid, following his third-round technical knockout defeat to Joshua in December 2016 in Manchester, England. Molina was scheduled to fight Poland’s Mariusz Wach (33-3, 17 KOs, 1 NC) on Friday night in Warsaw. 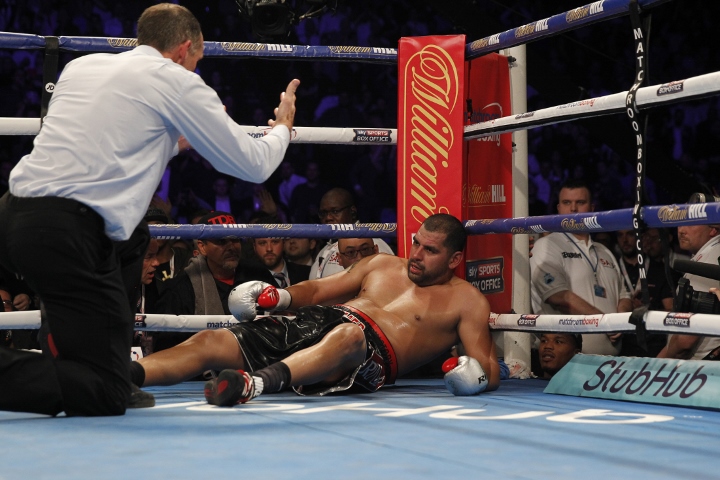 A statement released Tuesday by UK Anti-Doping read, “American boxer Eric Molina has been suspended from all sport for a period of two years following an Anti-Doping Rule Violation (ADRV). Mr. Molina tested positive for the presence of the prohibited substance dexamethasone, following an In-Competition test on 11 December 2016, after his fight against Anthony Joshua.

“Mr. Molina was charged with ADRV pursuant to the Article 2.1 of the Anti-Doping Rules – Presence of a Prohibited Substance or its Metabolites or Markers in an Athlete’s Sample.”

The Weslaco, Texas, native beat Terrell Woods (16-41-7, 11 KOs) by majority decision in a six-rounder September 2 in Palmhurst, Texas. Two months later, Dominic Breazeale (19-1, 17 KOs) dropped Molina in the eighth round and beat him by technical knockout in a WBC elimination match November 4 at Barclays Center in Brooklyn.

“Every athlete is solely responsible for what is in their system and must adhere to the strict liability principle,” UK Anti-Doping chief executive Nicole Sapstead said in a statement. “All athletes at any level should familiarize themselves with the WADA prohibited list and ensure they do not put themselves in a position where they may breach anti-doping regulations.”

[QUOTE=Redgloveman;18797907]Dillian Whyte got a 2 year ban after drinking an energy drink he bought in a shop so the treatment isn't inconsistent. And apparently it took so long because Molina was outside of UKAD's jurisdiction. I can't claim to be…

[QUOTE=Jkp;18797588]Why dont you tell everyone why he got the harshest penalty for a substance that doesn't even enhance performance? Tell us why it took 2 years? He got far worse punishment than fighters caught doing proper anabolics.[/QUOTE] Dillian Whyte got…

[QUOTE=Redgloveman;18796132]Well he would say that, wouldn't he?[/QUOTE] Why dont you tell everyone why he got the harshest penalty for a substance that doesn't even enhance performance? Tell us why it took 2 years? He got far worse punishment than fighters…