Ennis: Extra Weight Won’t Matter For Abreu; I'll Go In There & Get The Stoppage

Jaron Ennis isn’t unnerved by Juan Carlos Abreu’s attempt at gaining a physical and psychological advantage over him.

The gifted Philadelphia welterweight spars with super middleweights and light heavyweights, so Abreu will be far from the biggest boxer with whom he has traded punches. The Dominican Republic’s Abreu weighed in at 150¼ pounds Friday, 3¼ pounds above the contracted limit of 147 for their 10-round fight Saturday night.

Abreu attempted to make weight a second time, but he returned to the Mohegan Tribe Department of Regulation’s scale at the same weight, 150.2 pounds, as when he first tried. Ennis’ handlers moved forward with their fight after Abreu agreed to pay an undisclosed sum out of his purse to Ennis.

“I wasn’t worried about it,” Ennis told BoxingScene.com. “I got extra money. Now, it’s time to be in savage mode and end Saturday with a bang, with a statement.” 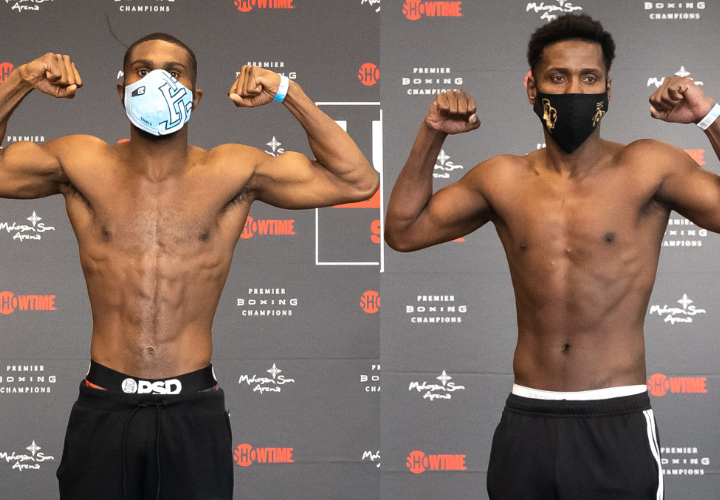 Ennis still doesn’t view Abreu’s additional weight as an advantage for an underdog who has displayed a reliable chin against legitimate welterweight contenders.

“It’s nothing new to me,” Ennis said. “I spar bigger guys all the time because I can’t get work with guys my size. So, I spar 68-pounders and 75-pounders. I spar heavyweights, too. I look at it like it doesn’t matter to me. I’m still gonna do what I need to do.”

Ennis weighed in at 146 pounds, one pound below the contracted maximum. He wasn’t offended by his opponent’s lack of professionalism.

“It didn’t bother me,” Ennis said. “I made weight. I did what I was supposed to do. At the end of the day, we’ve still gotta get in the ring. I’m just gonna go in there and continue with my game plan, do what I was gonna do in the first place. That’s get the job done, get the win and get the stoppage. I’ve just gotta be smart, have my fun and make it easy for myself.”

Following Ennis-Abreu, Mongolian featherweight contender Tugstsogt Nyambayar (11-1, 9 KOs) is scheduled to battle Cobia Breedy (15-0, 5 KOs), of Hyattsville, Maryland, in a 10-rounder. In the main event, Erickson Lubin (22-1, 16 KOs), of Orlando, Florida, and Cleveland’s Terrell Gausha (21-1-1, 10 KOs) will fight for the right to become the WBC’s mandatory super welterweight championship challenger in a 12-round, 154-pound elimination match.