Ellerbe: Pacquiao-Thurman Will End In KO; Could Be Hagler-Hearns

Leonard Ellerbe is convinced that the Manny Pacquiao-Keith Thurman fight will end in a knockout.

Ellerbe is so sure Pacquiao and Thurman will aggressively attempt to score a knockout, the Mayweather Promotions CEO thinks their welterweight championship match July 20 might mirror one of the most storied slugfests in boxing history.

“I think this will be a firefight from the very beginning,” Ellerbe, whose company is the primary promoter of the Pacquiao-Thurman card, told BoxingScene.com. “There will be a lot of action early in this fight and both guys will try to take each other out. I could see it being the second coming of Hagler-Hearns.” 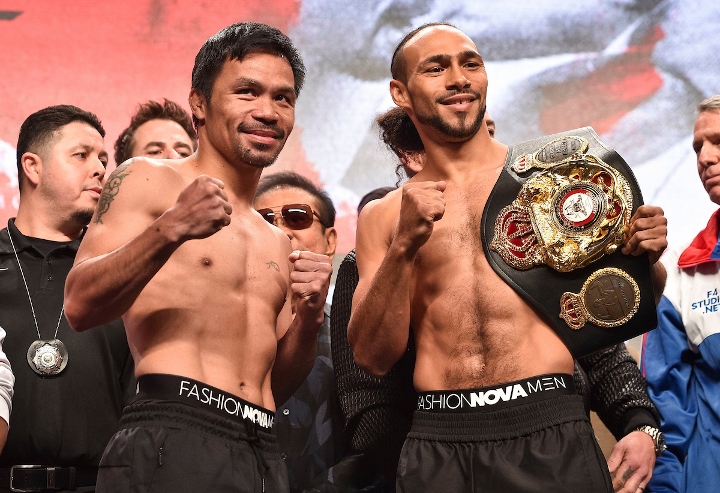 Ellerbe realizes that’s quite an expectation. Marvin Hagler and Tommy Hearns produced incredible violence in April 1985, when Hagler stopped Hearns in the third round of their middleweight title fight in Las Vegas.

Ellerbe senses, though, that Pacquiao is more motivated to demolish Thurman than for any fight since he lost a unanimous decision to Floyd Mayweather four years ago in Las Vegas.

“I don’t think there’s any way this fight doesn’t end in a knockout,” Ellerbe said. “Manny’s more motivated than he’s been in a long time because of all the trash Keith has talked to him. Whenever someone says they wanna destroy you, how could you not take that personally? You can tell Keith has made Manny mad.

Ellerbe believes Thurman is inspired, too, to show that his pedestrian performance against Josesito Lopez was more the result of rust than anything. An injury-plagued Thurman hadn’t fought in 22 months when he overcame serious trouble during the seventh round to beat Lopez by majority decision January 26 at Barclays Center in Brooklyn.

“Keith is looking at it like he is the naturally bigger guy,” Ellerbe said. “He’s coming to knock Manny out. Keith knows Manny is still dangerous, but he also is looking at him like he’s not the Pacquiao of 10 years ago. Keith wants to prove after the Lopez fight that he still has it, too.”

Pacquiao is a slight favorite to beat Thurman in their FOX Sports Pay-Per-View main event at MGM Grand Garden Arena in Las Vegas.

Hagler Hearns was a disappointment because Hearns broke his hand right away in what was shaping up to be a good fight and he could not really do a plan B. It really was only one good round. Another fight…

This fight will end in a DRAW. Or Thurman will get Pac out in Round 1.

There can be only one Hagler and Hearns...