Ellerbe: Pacquiao Has Own Plans, Not Waiting For Mayweather

Manny Pacquiao’s “thumbs up” emoji under Floyd Mayweather’s “announcement coming” social media post led many to believe that a rematch between the two star fighters was in the works.

But for those wondering when Mayweather-Pacquiao II will happen, Leonard Ellerbe provided an update in an interview with BoxingScene.com last week. 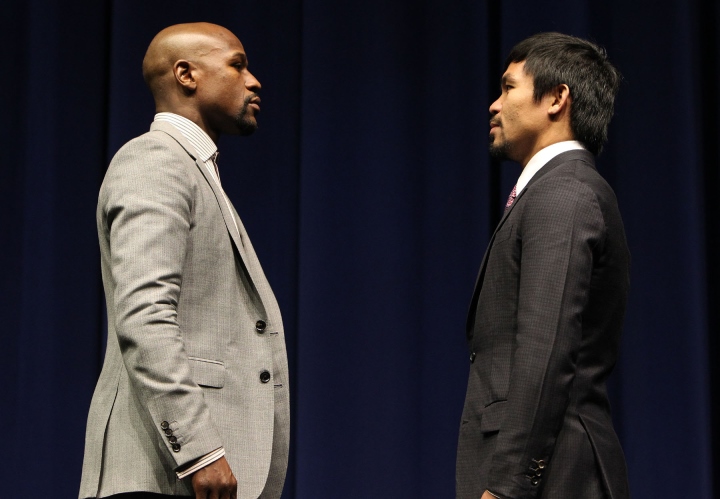 By now, the CEO of Mayweather Promotions knows to never say never when it comes to Mayweather fighting again.

The 42-year-old Mayweather has unretired multiple times throughout his illustrious career, with the latest return coming in 2017 when Mayweather recorded a 10th-round technical knockout against UFC star Conor McGregor to improve to 50-0.

“Yeah, Floyd is definitely,” Ellerbe said before stopping himself after being asked if Mayweather is done for good with fighting. “Floyd is busy with so many things. ... He was in five countries in the past month.”

As for a Mayweather-Pacquiao rematch, Ellerbe gave a much clearer answer.

“Pacquiao has his own plans,” Ellerbe said. “Pacquiao is not sitting around waiting on Floyd. Pacquiao has a number of big fights in front of him.”

Mayweather and Pacquiao will be forever linked, but with both fighters in their 40s, it might be time to accept that there will only be one fight between the two. Mayweather cruised to a unanimous decision over Pacquiao in a bout that didn’t deliver much action in 2015 at the MGM Grand Garden Arena in Las Vegas.

Ellerbe wants the focus to be on Pacquiao’s other potential bouts against the loaded PBC welterweight stable that includes Errol Spence Jr., Shawn Porter, Keith Thurman and Danny Garcia.

Pacquiao is reportedly close to an agreement with Thurman for a summer showdown.

Ellerbe also hinted that Garcia could be in line for Pacquiao if he’s able to defeat Adrian Granados on Saturday at Dignity Health Sports Park in Carson, California, for a PBC on FOX event.

Regardless of who will be Pacquiao’s next opponent, Mayweather will be watching.

“Floyd knows that all of them are excellent fighters,” Ellerbe said. “He’s had nothing but great things to say about each and every one of the welterweights.”

[QUOTE=strykr619;19673192]Since you want to get racist, roll yo azz back to da hood and get another baby momma and get dem food stamps ya herd.... ****ing egots are only good for two things making bastards and ebt cards.[/QUOTE] you,know who…

[QUOTE=Truth Serum;19673334]Better draw than Manny? Lol[/QUOTE]I think so, [B]at this point! [/B]Not too many people believe in Manny any more. Mikey just had 47K in TX. I could be wrong! Knowing DSG, he would choose Manny, thinking that he's old…

Leave the guy alone he has said several times he is retired and at 42 and bnot having a REAL fight in almost 4 yrs he should be.Nothing left to prove and who needs to see rematch of a 10-2,9-3…

[QUOTE=Bronx2245;19671793]That would not be bad either, but not as good as fighting Thurman! If I was DSG, I would rather fight Mikey than Pacquiao! Mikey, at this point, is the better draw, and more winnable too @ 147![/QUOTE] Better draw…