A new light heavyweight champion could be crowned in the coming months.

He already knows the identity of his opponent - Joe Smith Jr. (25-3, 20 KOs). The contest is very possible for the vacant belt of the World Boxing Organization (WBO). 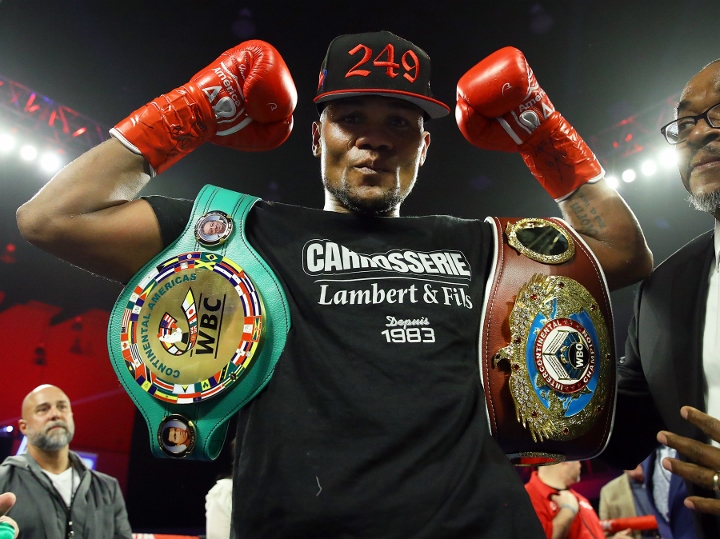 Alvarez returned to the ring on Saturday night in Verona, New York, and he pulled off a sensational one-punch knockout of Michael Seals. One week prior in Atlantic City, Smith dropped and outworked Jesse Hart for a dominant decision win.

Alvarez captured the WBO title in 2018, when he knocked out Sergey Kovalev in the seventh round. Kovalev gained revenge in their February rematch when he won a twelve round decision over Alvarez. Then Kovalev was knocked out by Canelo Alvarez in November.

Canelo would later vacate the belt. Gilberto Ramirez is the top contender to the crown, but he's been inactive since last April and he's currently having promotional issues.

"I know there will be discussions in the coming days," said Eleider Alvarez to The Montreal Journal.

"I watched Smith's fight when he faced Jessie Hart. He's a good boxer. I think our styles will mesh well and we'll give the people a good show. "

Alvarez's trainer, Marc Ramsey, is confident his boxer will overcome the challenge.

“It wouldn't be a complicated matter. Smith is a limited guy. Despite this, it is dangerous. He brings power in each of his shots. It will take serious preparation both physically and mentally. "

This duel could land in Quebec, at least this is the wish of Alvarez's lead promoter Yvon Michel. Alvarez is co-promoted by Top Rank, who also have several options on Smith.

[QUOTE=MulaKO;20339256]Well for starters there was a rematch clause And the WBO just threw that wrench in now Smith seems to be the odd man out[/QUOTE] Like you keep saying money talks they could've offered step aside money for a unification…

[QUOTE=Kannabis Kid;20339245]Mark my words Ben Davison will never have a champion he molded from scratch. Tyson Fury and BJS were both champions before Davison came in the picture.[/QUOTE] Probably not

[QUOTE=Kannabis Kid;20339233]The video I posted was right after Eleider knocked out Kovalev and actually had a world title as did Beterbiev if they didn't fight then in a unification why would they fight now when Artur has the belts and…

[QUOTE=MulaKO;20339238]Wtv Is he listed as his trainer Whichever way you wanna see it[/QUOTE] Mark my words Ben Davison will never have a champion he molded from scratch. Tyson Fury and BJS were both champions before Davison came in the picture.

[QUOTE=Kannabis Kid;20339226]Fury trained Ben Davison not the other way around.[/QUOTE] Wtv Is he listed as his trainer Whichever way you wanna see it