Joe Smith, Jr., come on down—and make sure to thank Gilberto Ramirez on his way out.

Plans for the World Boxing Organization (WBO) to fill its vacancy atop the light heavyweight division hit an expected speed bump, as Mexico’s Ramirez (40-0, 26KOs) will no longer participate in the sanctioning body’s ordered four-man box-off. The sanctioning body informed BoxingScene.com on Wednesday that Ramirez, a former super middleweight titlist has been removed from the tournament as a result of his failure to comply with the terms for his ordered semifinal title eliminator versus former 175-pound champ Eleider Alvarez.

The bout was ordered by the WBO in January, along with another eliminator between Umar Salamov and Maksim Vlasov. All parties were given a five-day window to accept the invitation to enter the tournament, to which all four contenders agreed. 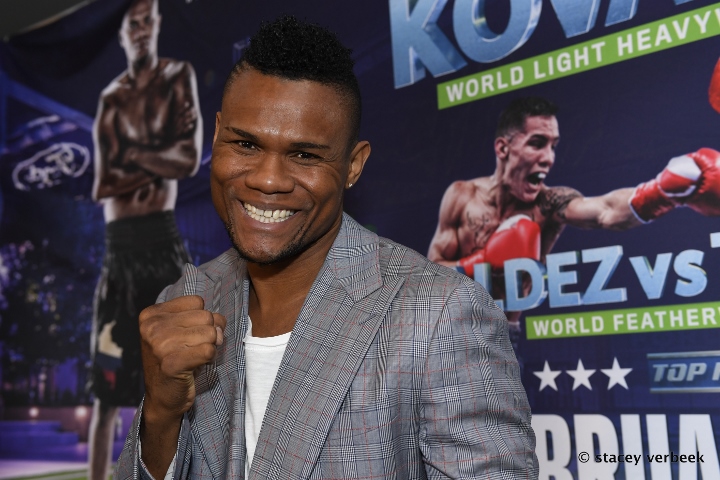 From there came the task of Ramirez having to negotiate terms with Canada’s Alvarez (25-1, 13KOs), although his current strained relationship with promoter Top Rank made that a non-starter—even with talks going through his manager, David Suh. The standoff forced a purse bid hearing, which took place February 20th in Las Vegas. Top Rank won the rights to the fight for $350,000 as the lone bidder, which came with a two-day period to confirm that both participants would proceed with the bout as planned.

As has been the case throughout the process, Ramirez went radio silent, forcing the WBO to take action.

“Having the Committee set forth a 48-hour confirmation period triggering upon the adjudication of the Purse Bid and given due notice to Mr. Ramirez and/or his representative Mr. Suh, through email and posting said communications in the WBO official website, as of today Wednesday, February 26th 2020, this Committee has not received any communication thereto,” Luis Batista- Salas, chairman of the WBO Championship Committee stated in a letter addressed to all involved participants, of which a copy has been obtained by BoxingScene.com. “Furthermore, Team Ramirez was advised that failure to comply with the Committee’s order would constitute a waiver of any rights thereto, and cause to resolve the matter without further notice and/or hearing.”

Ramirez has fought just once since abandoning his WBO super middleweight title reign, having scored a 4th round stoppage of journeyman Tommy Karpency last April. The unbeaten boxer has remained at odds with Top Rank, going as far as to claim free agent status although that remains very much in dispute.

Nevertheless, the stubborn stance taken has cost him a chance to fight for the WBO title and will likely result in his current inactive period extending even longer.

Meanwhile, the tournament will proceed as planned although with a new participant.

With Ramirez’s removal leaves room for the next highest ranked contender to participate. As such, an offer has been extended to Long Island’s Smith Jr. (25-3, 20KOs) to fill the void.

“The WBO World Championship Committee recommends the WBO President to communicate with the official representative(s) of WBO Participant Mr. Joe Smith, and grant said participant a 24-period to confirm in writing whether he is available, ready and willing to participate in the WBO Light Heavyweight Elimination Contest against WBO Participant Alvarez. This Committee reserves the right to issue any other ruling deem necessary, helpful, or convenient to accomplish the purposes and intent of these rules and regulations.”

Alvarez has remained on board from the moment the fight was ordered, which came shortly after his knockout win over Michael Seals. The win came one week after Smith Jr. soared up the rankings following a 10-round win over Jesse Hart this past January in Atlantic City.

For Alvarez, it was also the first piece of ring action for the former light heavyweight titlist from Canada by way of Colombia since losing his title to Sergey Kovalev in their rematch last February. Kovalev turned over the belt to Mexico’s Saul ‘Canelo’ Alvarez (no relation to Eleider Alvarez), who became a legitimate three-division titlist following an 11th round knockout last November in Las Vegas.

The reign was short-lived, with Canelo Alvarez relinquishing the title in mid-December though with his next fight yet to be announced.

The other side of the bracket remains intact, though without firm plans of when the bout will take place.  Salamov (25-1, 19KOs) not only remains interested in proceeding but has joined the Top Rank family as announced this week, and still in talks with Russia’s Vlasov (45-3, 26KOs).

Once the bouts are established with a firm date and location, the winners will move on to fight for the vacant WBO light heavyweight title. It’s an opportunity that Smith didn’t envision as a reachable scenario two months ago, nor one from which Ramirez—a longtime friend of the WBO family—expected to be exiled.

[QUOTE=Phill lynott;20425754]Although sick and disgusted of all this crap, I gotta back Zurdo on this! His promoter went along and encouraged the WBO to change their policy of a reigning champion to be in line for the title after moving…

[QUOTE=Phill lynott;20425754]Although sick and disgusted of all this crap, I gotta back Zurdo on this! His promoter went along and encouraged the WBO to change their policy of a reigning champion to be in line for the title after moving…

[QUOTE=EL GANCHO;20424578]Zurdo is a punk he aint mexican and if he is,hes oaxca[/QUOTE] Red Karma Points: The next time, respect the boxers who sacrifice for us and don't use belittle names to them.