Rising super middleweight star Edgar Berlanga is deep in camp ahead of his scheduled outing, on July 21, at 'The Bubble' at the MGM Grand's Conference Center in Las Vegas, as part of Top Rank's summer series live on ESPN.

New York-based Berlanga holds a unique 13-0 record as all of his wins coming via first-round stoppage, something unprecedented in boxing today. Berlanga opened up about his knockout streak and how it has affected his training ahead of his fourteenth pro outing. 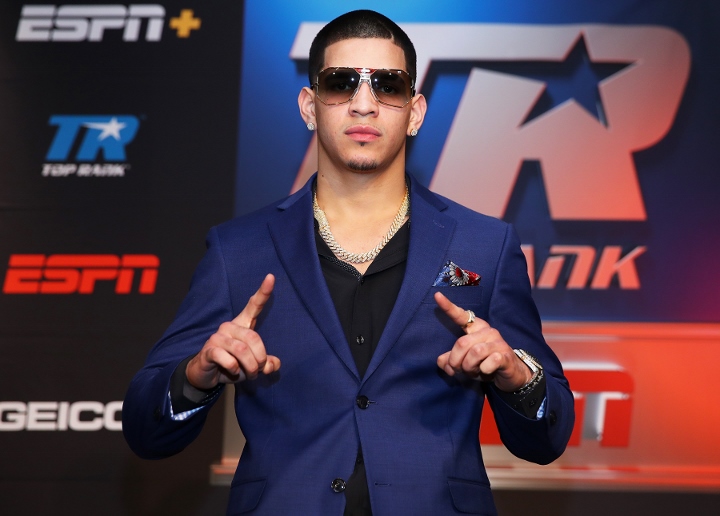 Berlanga said, "I've not really changed much about training because of the knockout streak. Training is all about improving as a boxer first and foremost. I had a good amateur career and that comes from being a good technical boxer. So my focus in training has been to continue to improve my skills under my trainer Andre Rozier and Team Havoc.

"I've been sparring with top-class fighters as always. I've been getting good work with Sergiy Derevyanchenko and Joe 'Mack' Williams and they are two of the best New York-based fighters you can work with. So training camp for this fight has been good alongside my conditioning too with Dave Honig. We have made the best of things despite the COVID-19 restrictions."

Berlanga hails from Puerto Rican heritage, with the majority of his family being born and raised on the Caribbean island. Berlanga discussed the importance of his Puerto Rican lineage and the impact it has on his boxing career.

The 168-pounder said, "I love being Puerto Rican and I love being from New York. Both places are incredibly important to me and they are a massive motivation in my career to be successful.

"I grew up watching the likes of Miguel Cotto and Felix Trinidad. Those fighters are inspirations to Puerto Rican's and they all boxed at Madison Square Garden. They were massive attractions in New York and the world over, and my goal is to follow in their footsteps."

Berlanga continued, as he elaborated on his feelings regarding featuring on Top Rank's summer series in Las Vegas.

"I am very grateful to be able to feature on the Top Rank Summer Series and I want to thank my advisor Keith Connolly, my father, and the team at Top Rank for giving me the opportunity to box live on ESPN at the MGM Grand in Las Vegas," Berlanga said.

"Just being able to box at the MGM Grand in Las Vegas is what dreams are made of so I'm so grateful for that. I've worked hard in training camp and I'm very focused on putting on my best performance to date. I'm not going out there looking for a knockout.... if it comes, it comes. I'm going out there to put on the best technical performance I can while aiming to make my team and my supporters in New York and Puerto Rico proud of my performance."

[QUOTE=CPLVS;20652494]if you don't assume that Matias' literal, and unfortunate, killing someone two fights prior would affect him going forward, for however short or long, and allow him the benefit of the doubt, smh. if he can proceed, and on the…

I like this Kid a lot, real Star Potential with a very explosive and exciting style

[QUOTE=Joe shmo;20652454]I hope so, they haven't had an heir to the throne since cotto. I thought Matias was gonna b that dude, but it looks like I was wrong, I gotta see how he shakes back after that loss tho…

[QUOTE=Terrorbilly252;20652434]This boy is something special he will be the next great Puerto Rican fighter I wish him the best always real humble guy[/QUOTE] I hope so, they haven't had an heir to the throne since cotto. I thought Matias was…