Eddie Hearn says he is planning to stage a series of fight nights in the garden of the house where he grew up in Essex.

The Matchroom headquarters in Brentwood are in what used to be the home of Hearn’s father, Barry, the Matchroom founder, and is situated in 15 acres of grounds off a country lane. 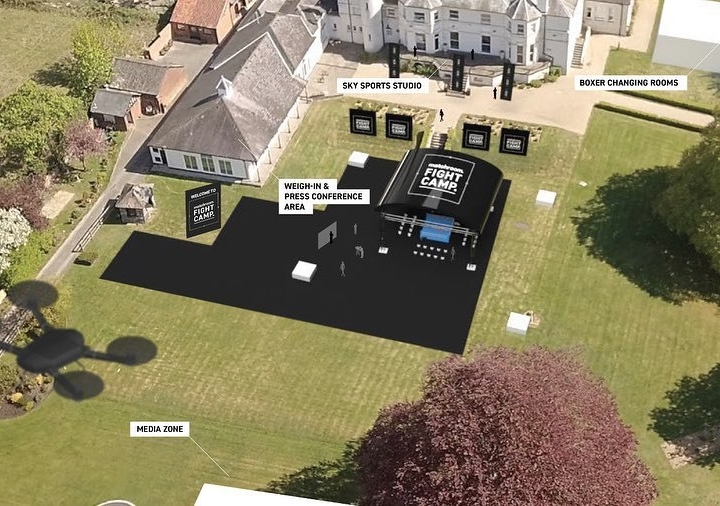 No public will be admitted to the shows and only about 90 people will be allowed on site.

“Financially this will be painful for us but after the momentum we have worked so hard to build over the past ten years, I’m not going to let boxing just dribble back,” Hearn told the Daily Mail. “While other guys go with arenas and empty studios, ours will look very different.

“Just imagine it. It is summer, the house is all lit up, you can see Canary Wharf in the distance and fireworks are going off. Then over the hill walk Dillian Whyte and Alexander Povetkin for a massive tear up on my lawn.

“World championship boxing in my garden? Oh, go on then.”

The series of shows has a working title of “Matchroom Fight Camp”. There will be four or five fights on each show, the maximum laid out by guidelines circulated by the British Boxing Board of Control.

Hearn said he did not want to just put shows on in a television studio.

“We cannot just bring boxing back with a dark studio,” he said. “We have built our product on the razzmatazz, the sexiness and the drama. It has all been about building that moment for a fight, so we cannot afford to just bring people out like a game show.

“We want to create a gladiatorial environment that will not only ensure compelling viewing but will also ensure fighters can perform at the highest level.”

Matchroom said they plan to take over a nearby hotel, which will serve as the test location as well as the base for all personal for the week.

“It is a huge mission,” Hearn said. “We are going to turn our headquarters here into an outdoor venue for live boxing, with a full canopy in the middle of the garden and the ring overlooking London.

“We are building changing rooms for the fighters, setting up a space for a ring walk, and figuring out how we can do everything you need for this kind of production with as few people as possible.

“We are in talks with a nearby hotel about taking control of it for each of the weeks. The way it will work is everyone involved - the fighters, their teams, the broadcasters - will go into the hotel on Tuesday and the fighter and their team will go to a testing facility at the hotel. You will go in, get tested, be handed a room key and go straight to your room, where you will wait until you get the result of the test.”

Anyone having a test will have to wait in their room for a day before getting the all clear.

'The tests are comprehensive and they take 24 hours, so the fighter will stay in their room until they get a call from our doctors, likely on the Wednesday, with their results,” Hearn said. “If they are positive, they will leave the hotel immediately. If they are not, they are able to leave their room and take part in the obligations of fight week, all with social distancing.

“Everyone involved in the show, from top to bottom, will have to go through that process before they are allowed on to our premises.

“In terms of fight-week promotion, that is the other side of the challenge. How do you do the media around it? Obviously we cannot have dozens of journalists turning up and sitting shoulder to shoulder for a presser and a weigh-in like normal.

“So we need to decide how it will go - it is likely that Zoom interviews and social media live streams with the fighters and journalists will be the new norm, and pumping out clips of the fighters around the clock, building up to the weigh-ins on the grounds on Fridays and the fights on Saturdays.”

[QUOTE=rudy;20566010]Bringing back the days of fighting in the masters house for chump change[/QUOTE] Hearn channeling dicaprio’s character in django unchained

[QUOTE=adotd;20565987]Don't you mean every promoters fighters? i.e Golden Boys Canelo, PBC's Luis Ortiz, Top Ranks Tyson Fury, etc. Not just a single promoter.[/QUOTE] Hearn gets a little more scrutiny when fighters on his roster can get caught using drugs and…

Fair play Edward, nobody saw that coming. Can only be a good thing for all concerned, fighters and fans. I'll be tuning in...