If Robert Easter Jr. beats Rances Barthelemy on Saturday night, he’ll find himself in perfect position, theoretically at least, to challenge the consensus No. 1 lightweight in boxing.

Easter still doesn’t think winning one of the WBA’s 135-pound championships will be enough to entice Vasiliy Lomachenko to fight him. Lomachenko might not have much choice eventually, because Easter could become the mandatory challenger for his WBA “super” lightweight title.

In the short term, though, Easter expects to be forced to pursue other opponents if he beats Barthelemy on Saturday night in Las Vegas.

“With him being at Top Rank,” Easter told BoxingScene.com, “it’s possible to be made. … That’s a future a fight. I am looking forward to facing him, or any other champion out there.” 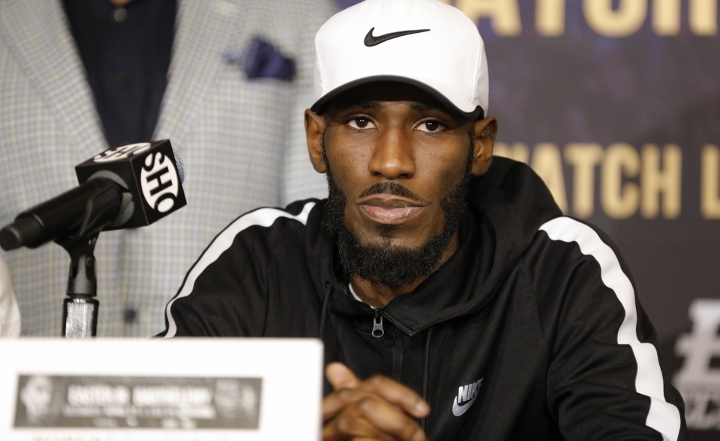 The WBC 135-pound crown is vacant because Mikey Garcia gave it up earlier this week. Garcia (39-1, 30 KOs), of Moreno Valley, California, defeated Easter by unanimous decision in their 12-round lightweight title unification fight July 28 at Staples Center in Los Angeles.

Easter would like an opportunity to fight Garcia again. He realizes, though, that he’ll have to move up to 140 pounds to chase that bout because Garcia will compete at junior welterweight for now.

If the 5-feet-11 Easter remains at lightweight, the 5-feet-6 Lomachenko is his primary target, one Easter expects to be as elusive outside the ring as he is inside it.

The 28-year-old Easter still respects Lomachenko’s resume and everything the two-time Olympic gold medalist has accomplished during his five-year pro career. Lomachenko, 31, won world titles at 126 and 130 pounds prior to fighting at lightweight.

“He’s a little small for the weight class,” Easter said, “but in the fights he’s been taking, he’s been holding his own.”

Showtime will broadcast the 12-round, 135-pound championship match between Easter (21-1, 14 KOs), of Toledo, Ohio, and the Cuban-born Barthelemy (27-1, 14 KOs) from The Chelsea inside The Cosmopolitan of Las Vegas. In addition to the WBA’s “world” championship, Easter and Barthelemy will compete for the vacant IBO lightweight title.

Well he is taller...

[QUOTE=Motorcity Cobra;19696855]Loma would beat him. But damn i sometimes forget they're in the same weight class because nobody ever mentions those two fighting. This would be a good fight. And looking at Easter's resume he has never ducked smoke[/QUOTE]i don’t…

Loma hasn't even mentioned Easter. He's just a nobody. Not in the same league as Loma. Saturday was snooze fest. And I read from a few racists on here. Bringing up Salido as if that matters in the context of…

[QUOTE=Motorcity Cobra;19696855]Loma would beat him. But damn i sometimes forget they're in the same weight class because nobody ever mentions those two fighting. This would be a good fight. And looking at Easter's resume he has never ducked smoke[/QUOTE] After…