Jaron Ennis needs a new opponent for his upcoming fight.

BoxingScene.com has learned that Thomas Dulorme, who was scheduled to encounter Ennis on December 19 in Uncasville, Connecticut, failed another COVID-19 test administered Monday. Dulorme had hoped that his failed test Thursday was a false positive because he is asymptomatic.

Had the Puerto Rican veteran tested negative Monday, he would’ve wanted to remain in a 10-round welterweight fight Showtime was supposed to televise two weeks from Saturday night from Mohegan Sun Arena. 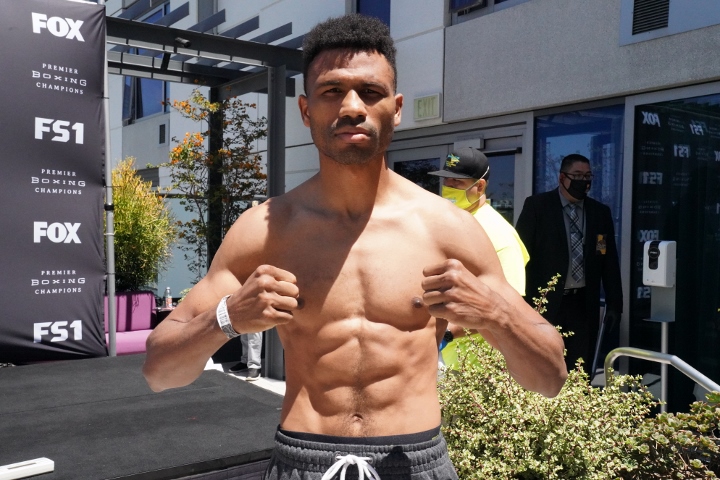 Chris van Heerden is among the potential opponents who could replace Dulorme on short notice. South Africa’s van Heerden (28-2-1, 12 KOs) has won five straight fights since Errol Spence Jr. stopped him in the eighth round five years ago in Toronto.

Steve Kim was the first to report on Twitter that van Heerden is under consideration to face Ennis.

Dulorme would’ve been the best opponent of Ennis’ career, however, had they moved forward with their 10-round, 147-pound bout. Dulorme has lost unanimous decisions to James (27-1, 12 KOs) and WBA world welterweight champ Yordenis Ugas (26-4, 12 KOs) and by technical knockout to three-division champ Terence Crawford (37-0, 28 KOs) and Luis Carlos Abregu (36-3, 29 KOs).

The 23-year-old Ennis (26-0, 24 KOs) most recently stopped the Dominican Republic’s Juan Carlos Abregu (23-6-1, 21 KOs, 1 NC) in the sixth round of their scheduled 10-rounder September 19 at Mohegan Sun Arena. Abregu had not been knocked out before he faced Ennis, who has won 16 straight fights inside the distance.

Dulorme’s predicament marked the second instance in which Showtime’s December 19 telecast has been impacted by COVID-19. Emmanuel Rodriguez replaced Nordine Oubaali as Nonito Donaire’s opponent in the 12-round main event three weeks ago because France’s Oubaali contracted COVID-19 and had to temporarily stop training.

Las Vegas’ Donaire (40-6, 26 KOs), the mandatory challenger for Oubaali’s WBC 118-pound championship, and Rodriguez (19-1, 12 KOs) will fight for the WBC bantamweight title. The WBC has designated Oubaali as its bantamweight champion in recess.

Van Heerden is like going to the graveyard. Again, I think Ennis isn't the goods, mostly hype. He should at least fight a live prospect like Daniyar Yeleussinov. This guy needs to step up his game.

Both are garbage fights, Ennis needs to finally step up against a decent guy.

[QUOTE=revelated;20922052]Van Heerden sparred him after Paulie quit and went home, bro.[/QUOTE]No he didn't but ok he was sparring Van Heerden in 2016. I guess Chris went to the future after they sparred in 2016 and went and sparred against Mcgregor…

[QUOTE=revelated;20922051]Same guy, yes.[/QUOTE] Then I stand by what I said. Boots Ennis is a very talented fighter who should not be fighting someone like Van Heerden. Who's next after him, Chris Algieri. The idea behind matching a hot prospect is…

[QUOTE=SplitSecond;20921709]Van Heerden is tough. Fairly feather fisted, but had his moments vs Spence. He didnt go down until Spence hit him with a blatant rabbit punch.[/QUOTE] He was getting pummeled so badly by Spence, it gave me a migraine just…